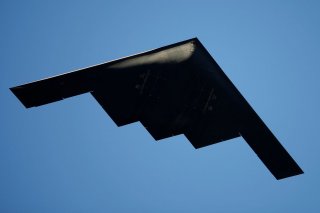 Why build one stealth bomber when two would be better? That is likely the thinking behind China’s People’s Liberation Army Air Force’s current strategy. It has released a bit of information on its Xian H-20 stealth bomber, which seems to be similar to the U.S. Air Force’s B-2 Spirit in form and function—and resembles the iconic “flying wing” that one almost expects with stealth aircraft.

This has included a viral marketing campaign that almost resembles a sizzle reel for an upcoming Hollywood blockbuster. It is also likely that the PLAAF could officially debut the aircraft at its Zhuhai Airshow. Putting a stealth aircraft in such a spotlight would seem in stark contrast to its mission of not being seen, but perhaps that is why so little is known about the “other” stealth aircraft that could be in the works.

This is the JH-XX, a rival stealth bomber concept proposed by Shenyang Aircraft Corporation, which may have been passed over in favor of the longer-range H-20. However, as recent reports have suggested the H-20 may not completely live up to the expectations so it may make sense that Beijing would want to hedge its bet with a second stealth aircraft.

From what little has been seen of the JH-XX stealth fighter/bomber, it seems that unlike the flying wing concept this would be a more traditional looking aircraft that could be an evolution of the Russian Flanker and Chinese J-31 stealth fighter; aircraft for which Shenyang currently produces. Hence it could be more of an evolutionary approach to a stealth aircraft rather than a truly revolutionary one.

As The National Interest has previously reported, this could be a balance of low-detectability features against speed and limited dogfighting abilities. That could be a fair trade-off given that if detected, the aircraft might need to defend itself in potentially hostile skies especially as the aircraft could be more “regionally-focused” than a long-range aircraft.

While China certainly may have global power aspirations, the fact can’t be denied that it also has many regional rivals that include Japan, Taiwan, Vietnam, Malaysia, Thailand and the Philippines—a few of which are U.S. aerospace customers. Thus, China doesn’t so much need aircraft that can strike across the Pacific, but rather fast fighter/bombers that can reach targets in the South China Sea—a region contested by several of those regional rivals.

The development of this more regionally-focused aircraft may be progressing, even if the new aircraft isn’t getting the spotlight.

As The Drive reported last year, a Chinese annex report explained, “The PLAAF [People’s Liberation Army Air Force] is developing new medium- and long-range stealth bombers to strike regional and global targets. Stealth technology continues to play a key role in the development of these new bombers, which probably will reach initial operational capability no sooner than 2025.”

The Chinese are thus building stealth aircraft for particular needs. The H-20 may trade speed in exchange for a greater payload and range, but it would need to penetrate enemy airspace without being detected. Meanwhile, JH-XX would have a shorter range and smaller payload, but would be much faster. If detected it could have the ability to sprint away or, if necessary, even hold its own.