The Jobs Keep Growing: 145.000 New Ones Added in December 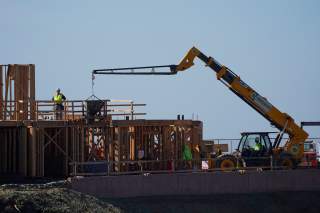 The U.S. economy added 145,000 jobs in December, while the unemployment rate remained at 3.5%, according to Department of Labor data released Friday.

145,000 jobs were added in December, according to the Bureau of Labor Statistics report — about 121,000 fewer jobs than were added in November.

,000CHARLESTON, WV – MAY 05: Republican Presidential candidate Donald Trump shos off a hard hat during hie rally at the Charleston Civic Center on May 5, 2016 in Charleston, West Virginia. Trump became the Republican presumptive nominee following his landslide win in indiana on Tuesday.(Photo by Mark Lyons/Getty Images)Economists had predicted that 164,000 jobs would be added and that the unemployment rate would remain at 3.5%, according to CNN, about 100,000 jobs fewer than the previous month when a General Motors strike ended and boosted job numbers.

The unemployment rate has held steady between 4% and 3.7% for more than a year before the April jobs report showed it drop to 3.6%. Prior to April’s report, the consistent unemployment rate suggested that workers are jumping back into the workforce to fill open jobs, rather than the workers who are currently collecting unemployment welfare, according to The Wall Street Journal.