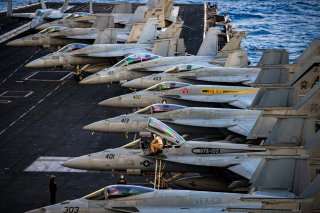 President Joe Biden’s 2022 likely budget proposal threatens to cut or flatline the defensive budget at a time when Beijing is ramping up military spending and production, Sen. Jim Inhofe warns.

Biden appears to be backing his party’s line.

The spending request seeks trillions for the domestic priorities of the Democratic Party’s constituencies but heeds the Center of American Progress’ call for “fiscal discipline” at the Pentagon.

Members of the House Progressive Caucus oppose nuclear modernization, missile defense, and support a no-first-use policy, which says the United States would not use nuclear weapons first in a war, thus abandoning strategic ambiguity aimed at keeping adversaries guessing.

“As the only country to have ever used nuclear weapons in a conflict, the United States must play a leading role in ensuring that the most destructive weapon ever created is never used again,” Democratic lawmakers said in a March 3 statement.

“In making necessary changes to the U.S. nuclear posture and force structure, your Administration can best reflect the hard, cold reality that there is no such thing as a winnable nuclear war,” the statement continued.

The caucus also advocates eliminating the replacement for the fifty-year-old Minuteman III missile, which the military says has reached the end of its useful lifespan. President Biden signaled during the campaign that he shares many of these issues and might consider a no-first-use policy on nuclear weapons.

The lawmakers called for diplomacy, but without the threat of overwhelming military force, totalitarians have no reason to make concessions.

Both China and Russia are quickly modernizing their nuclear weapons, while America’s nuclear arsenal is so old—the newest weapons were built in the 1980s—there is no guarantee they will work. America’s allies depend on American nuclear deterrence for their security and as a hedge against nuclear blackmail.

“China gets it. Beijing also talked a big game at the first bilateral showdown in Anchorage two weeks ago—but has backed that talk up by increasing the PLA defense budget by 6.8 percent this year,” Inhofe wrote in Newsweek. “If the United States responds with a budget cut instead of a corresponding investment, it would send a terrible signal to Beijing.”

Beijing’s budget is significantly less on paper at $183.5 billion, according to the Center for Strategic and International Studies (CSIS). Estimates by other think tanks put defense spending around $261 billion. China’s buying power could be much higher because it relies on state enterprises. The U.S. Defense Department has significant contractor costs.

This has allowed the Chinese to churn out new planes, warships, and missiles at a cheaper comparative cost, and at a rate that can’t be matched by the eroded U.S. military-industrial base. Cost overruns at the Pentagon in projects like the F-35 fighter jet, the Ford-class aircraft carrier, and the Zumwalt-class destroyer have been a perpetual complaint from Capitol Hill and elsewhere.

Furthermore, many items including China’s spending on its militarized Coast Guard and its People’s Armed Police paramilitaries remain off-budget. It is difficult to accurately compare U.S. and Chinese defense spending.

Obama-era budget cuts left America unprepared for the return to great-power competition that will mark the 2020s and beyond. It could take an additional $400 billion in investments to play catch up to our adversaries, according to Inhofe. He noted that during the Obama years, Chinese defense spending exploded by 83 percent while the former president slashed defense spending by 20 percent.

Budget cuts were implicated in the disastrous collisions of the USS John S. McCain and USS Fitzgerald with merchant vessels in 2017. Sailors lacked adequate training and “bruising” deployments combined for the perfect storm.

The U.S. Navy’s cruiser fleet struggles with its fleet of aging 1980s vintage Ticonderoga-class cruisers, which face constant breakdowns. Funding to upgrade the fleet has been scarce, so it is unclear what might replace them.

Even if there was adequate funding, the Navy lacks adequate shipyard space to build new ships and maintain the ones it has. Meanwhile, China boasts the world’s largest shipbuilding capacity.

Biden is considering reducing the number of aircraft carriers, which will overtax the already overstretched U.S. fleet.  One proposal would result in the decommissioning of the Nimitz-class carrier USS Harry S. Truman, which was commissioned in 1998.

Obama-era defense cuts crippled America’s ability to keep up with our adversaries. Further cuts will only further erode the U.S. military’s ability to deter increasing threats from China and Russia.