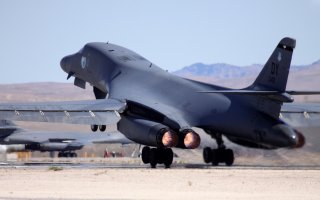 President Joe Biden’s first defense budget request shows that he doesn’t understand or appreciate the value of peace through strength. At $715 billion, the budget falls short of keeping up with the Pentagon’s needs adjusted for inflation.

The president spends heavily on research and development but invests nowhere near as much in procurement items that can help us to deter conflict with China, Russia, and Iran. Sen. Jim Inhofe (R-Okla.), ranking member on the Senate Armed Services Committee, and Rep. Mike Rogers (R-Ala.), ranking member on the House Armed Services Committee slammed Biden’s request in a press release:

“President Biden’s defense budget request is wholly inadequate—it’s nowhere near enough to give our service members the resources, equipment and training they need. It’s disingenuous to call this request an increase because it doesn’t even keep up with inflation— it’s a cut. Fundamentally, it does not adequately resource the 2018 National Defense Strategy, forcing impossible choices between readiness and modernization upon commanders and troops.”

Navy Admiral John C. Aquilino testified in March that China’s capabilities are expanding at what he sees as an alarming rate. Keeping up with China requires additional infrastructure that’s found nowhere in the Biden budget. Many Democrats want more cuts, and the Democratic Socialists of  America (DSA) that has become a major force in the Democratic Party wants an end to deterring China.

The DSA has gained ninety thousand members because of Bernie Sanders’s 2016 and 2020 presidential campaigns and has elected numerous Democrats to Congress including Reps. Alexandria Ocasio-Cortez (D-N.Y.), Cori Bush (D-Mo.), Rashida Tlaib (D-Mich.) and Ilhan Omar (D-Minn.). The influential Congressional Progressive Caucus has had close ties to the DSA since its founding in 1991; it has been among those pressuring the Biden administration to cut defense in favor of other domestic priorities. DSA has waged successful campaigns against moderate Democrats, adding to its clout in the party; consequently, its opposition to deterring China can’t be laughed off or lightly dismissed.

Joe Biden brags about his $6 trillion jobs plan, but apparently, that doesn’t include jobs building and upgrading the shipyards and increasing the workforce that the Navy needs to maintain the ships it has in its inventory. Nor does it mean matching China’s ability to churn out new warships.

A March report by the Congressional Budget Office (CBO) found that the nation’s four government-owned shipyards have suffered from inadequately skilled labor, which has resulted in long delays on the overhauls of submarines and surface ships.

“Despite the increased number of shipyard workers and the anticipated improvements in productivity, CBO projects that the demand for maintenance over the next few decades will exceed the supply of labor in most years,” the report said.

The CBO offered four options: keeping the workforce at its current size; increasing the shipyard workforce from thirty-seven thousand to thirty-nine thousand; shift maintenance of nuclear submarines and aircraft carriers to private shipyards; or reduce the size of the nation’s fleet of nuclear-powered vessels. Currently, eighty-one of the Navy’s approximately three hundred warships are nuclear-powered. Maintenance time on these ships dramatically increased following the 2013 budget sequestration act. It increased from just over four hundred days to more than sixteen hundred days and has remained dramatically above the 2013 levels ever since. Joe Biden’s budget will no doubt make maintaining existing warships worse, let alone building the 355 ships that were called for under the 2018 National Defense Authorization Act (NDAA).

“We stopped training for months . . . Of course, all of that affected readiness. It’s had an impact on every part of our defense enterprise. And that means, surely, accidents,” Chuck Hagel, who headed the Pentagon when the cuts were announced, told The New York Post in 2018.

Cost-cutting and reduced training were blamed in the collisions of the Arleigh Burke-class destroyers USS John S. McCain and USS Fitzgerald with merchant ships and likely caused the running aground of the USS Antietam in Tokyo Harbor in 2017.

“The ripple effect of that goes through the years,” Admiral Michelle Howard said in 2016, calling for an end to sequestration. “You not only lose the maintenance time, but you lose qualification time for people, and that experience set can never be bought back.”

The U.S. military is barely treading water in the face of the first major peer threat since the end of the Cold War. Failing to keep pace with the Chinese and the needed 3 to 5 percent increase in the defense budget as recommended by the bipartisan National Defense Strategy Commission that included Biden’s Deputy Secretary of Defense Kathleen Hicks can only have a negative impact. The United States can’t afford to accede to Democrats who are opposed to a strategy of deterrence.