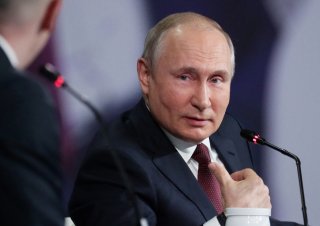 President Joe Biden embarked on his first overseas trip since taking office, and arrived in the United Kingdom at Royal Air Force Base Mildenhall on Wednesday. Even before meeting UK leaders, the president took to a stage in a hangar where he spoke to U.S. Airmen and their families for more than twenty minutes.

Biden praised the Airmen for their service and dedication to duty, while he also reflected on his military connection—but made it clear that the point of the trip was “to meet with Mr. Putin to let him know what I want him to know.”

According to Air Force Magazine, members of the 100th Air Refueling Wing, the 352nd Special Operations Wing, 48th Fighter Wing, 501st Combat Support Wing, and 95th Reconnaissance Squadron were all present for Biden’s speech, whereas commander in chief remarked that he was “so damn proud” of the service members.

“We owe you. We owe you big,” Biden told the audience. “I’ve long said that as a nation, we have many obligations, but we only have one truly sacred obligation, only one. That’s to properly prepare and equip the women and men we send into harm's way, and to care for you and your families, both while you're deployed, and when you come home.”

Much of the speech was focused on foreign affairs and Biden’s planned meeting with Russian president Vladimir Putin.

“I’ll travel to Geneva to sit down with a man I've spent time with before, President Vladimir Putin,” Biden said. “We are not seeking conflict with Russia. We want a stable, predictable relationship. Our two nations share incredible responsibilities and, among them, ensuring strategic stability and upholding arms control agreements.”

The president also made it clear that under his administration the United States would move away from the Trump-era policy of “America First,” while Biden also said he would reaffirm support for NATO, as well as multilateralism to address the world's greatest challenges.

“At every point along the way we're going to make it clear that the United States is back and democracies of the world are standing together to tackle the toughest challenges and the issues that matter most to our future, that we're committed to leading with strength, defending our values, and delivering for our people,” Biden explained.

The White House had previewed the trip on Wednesday.

“He’s been getting ready for fifty years,” press secretary Jen Psaki said on Wednesday to reporters. “He has been on the world stage. He’s known a number of these leaders for decades, including President Putin, and including a number of the leaders he’ll see at NATO and he’ll see at the G-7. Now, this is an important opportunity for him to see them in person, and there’s nothing like face-to-face engagement in diplomacy.”

The climax of the trip is expected to be Biden’s first meeting with Putin next Wednesday in Geneva.