Joe Biden Has Given Up on New Hampshire. Is It South Carolina or Bust? 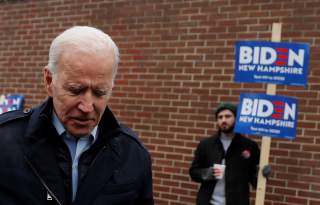 "I plan on trying to win New Hampshire. I'm not here to come in second. I never enter anything to come in second,” said former Vice President Joe Biden three months ago when he filed to be on the ballot. This morning he conceded defeat in the Granite State, hours before the polls closed.

“I think it's a real disadvantage if you don't come from the neighboring states. So, I think it's going to be hard to win this thing,” Biden told reporters in New Hampshire. “I think I’ll win the nomination.” Senator Bernie Sanders from neighboring Vermont is expected to win the state with a comfortable margin, while Biden is likely to come in either fourth or fifth place.

The Biden campaign is uprooting itself towards South Carolina, the fourth contest of the primary. This evening Biden and his wife will appear at a “campaign launch party” in Columbia, South Carolina. He’ll be accompanied by Rep. Cedric Richmond of Louisiana. His sister, Valerie Biden Owens, will remain New Hampshire to thank the campaign’s supporters after the announcement of tonight’s results.

“I have enjoyed traveling across New Hampshire, speaking to countless Granite Staters who understand we are in a battle for the soul of this nation and I have relished fighting for each and every one of their votes,” Biden explained. “I am looking forward to traveling to South Carolina this evening and Nevada later this week to carry our campaign forward and hear from the diverse voters whose voices must be heard in this process to select the Democratic nominee who will unite this country to defeat Donald Trump.”

Since the start of the campaign, South Carolina has been touted as the firewall for the Biden campaign. This is because the seventy-seven-year-old has held onto a strong plurality of support among black Democrats. A majority of Democratic primary voters in South Carolina are black, giving Biden a consistent double-digit lead over his competitors. Three polls conducted this month peg Biden’s current lead between five points and eighteen points.

Biden’s momentum has taken severe damage, however. Biden would become the first major party candidate in 28 years to win his party’s nomination without first winning either Iowa or New Hampshire. And it was a strong second-place finish in New Hampshire that catapulted Bill Clinton’s campaign (the most recent precedent) forward.

Prior to his fourth-place finish in Iowa, Quinnipiac pegged Biden’s support among black voters at 49%. But since then its been apparently cut in half, down to 27%. This bloodletting has benefited the campaign of former New York City mayor and multi-billionaire Michael Bloomberg, who has invested hundreds of millions of dollars in a targeted ad campaign across the south and other Super Tuesday states.

Based on these projections and more, FiveThirtyEight currently predicts Sanders is the candidate most likely to win South Carolina in two and a half weeks.