Is Joe Biden Looking to Gut the U.S. Navy? 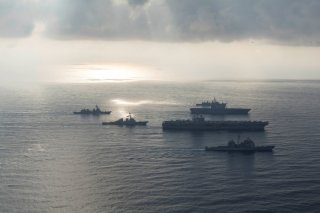 Congress must step in to correct the abysmal funding levels for the Navy found in the Biden administration’s funding proposal. It must also impose measures aimed at keeping contractors and the Navy on target and under budget. Cost overruns along with shoddy results have plagued the Navy for the past twenty years.

This year’s budget proposal will leave the Navy way short of the 355-ship goal mandated by the 2018 National Defense Authorization Act, Deputy Assistant Secretary of the Navy for Budget Rear Adm. John Gumbleton said. The average ship serves thirty-five years, and the Navy builds eight ships annually. Under the latest proposal, the Navy plans to retire fifteen ships and will be left with a fleet of 280 ships, with only 140 combat vessels by the 2030s. Forty-eight ships will leave the fleet by 2026.

Budgetary goals have taken priority over delivering a winning fleet strategy. There’s also been a lack of competent and clear leadership at the top that has frustrated Congress, Defense News reported in December.

The Navy lacks adequate financial resources from Congress to “simultaneously develop the next generation of air, surface, and subsurface platforms and must prioritize these programs balancing the cost of developing next-generation capabilities against maintaining current capabilities,” Acting Secretary of the Navy Thomas Harker stated in a June 4 memo. Not only that, it can’t “afford to own, operate, and maintain its current infrastructure and must prioritize demolition to achieve long-term sustainment.” Consequently, Biden’s Navy must choose between developing a destroyer, a submarine, or a replacement for the F/A-18 Hornet jet fighters.

At the same time, the Biden administration wants to spend trillions on miscellaneous non-defense projects.

The Biden administration has chosen a path of decline and pre-emptive surrender amid China’s naval ascendance. This is hardly a recipe for confidence in the U.S. Navy, nor an assurance that the Navy would prevail in a war with China’s growing fleet of over 350 ships and thousands of missiles. It likely will have 420 ships and have increased power-projection capabilities, especially with the deployment of its Type-003 aircraft carrier. This vessel reportedly will be equal in capability to the U.S. Ford-class carriers.

Every single major Navy procurement item for the fleet has been beset with cost overruns and engineering failures for the past two decades. The Zumwalt class destroyer was meant to have been a class of thirty-two ships that were to have replaced the Oliver Hazard Perry-class frigates and Spruance-class destroyers, and also filled in for the loss of naval gunfire support left behind by the retirement of the last of the Iowa-class battleships in 1992. Cost overruns resulted in the class of thirty-two ships being pared down to just three.

The project initially was projected to have cost $1.34 billion per ship in 1999, but that quadrupled to $4.4 billion once the USS Michael Monsoor, the most recently launched ship, hit the water almost twenty years later. Cost overruns with the projectile that was supposed to have been fired from its two railguns resulted in its cancellation and left the wonder weapons useless. The USS Zumwalt was plagued with mechanical difficulties from the start.

The Obama-Biden administration’s cancellation of the CG(X) program a decade ago leaves the Navy with a looming hole in its capabilities amid the planned retirement of the Ticonderoga-class cruisers over the next decade. The Ticonderogas-class entered service in 1980s and 1990s and are fast approaching forty years of service, and eleven of them will be removed from service in the next ten years.

They have 122 vertical-launch cells apiece compared with 97 for the Arleigh Burke-class destroyers that form the backbone of the U.S. fleet. Biden’s budget proposal would decommission the USS Hue City and USS Anzio next year. These along with the other planned decommissionings means the loss of 1,340 vertical launch tubes over the next five years based on projections from prior years.

Cost overruns were used as justification for the Obama-Biden administration’s decision to cancel the CG(X), next-generation cruiser, in 2011. Now, a decade later the Navy faces a growing hole in its offensive capabilities.

Two Ohio-class guided-missile submarines, each carrying 154 Tomahawk cruise missiles, will be taken out of service in 2026 after over forty years in the fleet. But the Block V Virginia-class subs replacing them will only carry forty apiece, and the existing Virginia-class submarines have suffered from parts wearing out faster than projected.

The two classes of Littoral Combat Ships (LCS)—the catamaran Independence-class and single-hull Freedom-class have struggled to define their mission and have been beset with constant mechanical issues. They originally were supposed to have had mission-specific modules, but those were canceled in 2016. The Navy found at least thirty-two “key reliability issues” with the ships. The USS Detroit had to be towed into port after it broke down on the way to its Florida port for repairs. Four LCS’s will be decommissioned under Biden’s proposal despite being in service as little as five years in one case.

“Decommissioning these two ships includes a cost avoidance strategy, so that scarce maintenance funding can be allocated to the highest priority ship,” the Biden defense budget briefing document stated.

The budget calls for funding a single Constellation-class frigate, which some critics say is already obsolete before a single ship has been constructed or launched due to the fact it’s being built on a design that’s already twenty years old. This means that Congress should impose discipline to ensure that its capabilities fit the 2030s, not the 2000s when America wasn’t faced with a near-peer adversary like China and a resurgent Russia. The Navy projects launching the first frigate in 2026.

“We’re early retiring the most powerful ships on the planet while replacing them—to a limited extent—with small, weak unmanned vessels.  In what alternate reality is this a good thing?” “Navy Matters” wrote.[MW2]

It’s up to Congress to increase funding for the Navy beyond the Biden administration request and to impose cost and design discipline on the contractors to prevent a repeat of recent procurement fiascos.

John Rossomando is a Senior Analyst for Defense Policy and served as Senior Analyst for Counterterrorism at The Investigative Project on Terrorism for eight years. His work has been featured in numerous publications such as The American Thinker, Daily Wire, Red Alert Politics, CNSNews.com, The Daily Caller, Human Events, Newsmax, The American Spectator, TownHall.com and Crisis Magazine. He also served as senior managing editor of The Bulletin, a 100,000-circulation daily newspaper in Philadelphia and received the Pennsylvania Associated Press Managing Editors first-place award in 2008 for his reporting. This article first appeared last year and is being republished due to reader interest.