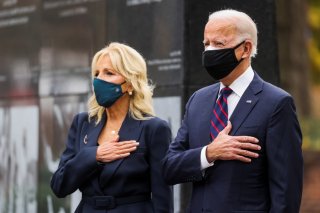 Four years of President Donald Trump’s abuse of the U.S. intelligence community has left it bruised and battered. It will fall to President-elect Joseph Biden to restore morale, competence, and trust in the agencies tasked with informing U.S. decisionmakers about the most daunting threats to the nation.

As vice president, Biden was rarely seen in the White House without a copy of the President’s Daily Brief under his arm. As an original member of the Senate Select Committee on Intelligence, Biden came to recognize the intelligence community as indispensable to U.S. national security.

Come January 20, Biden will be tasked with restoring the integrity of these agencies and harnessing the energy and capacity of intelligence professionals to ensure the United States is properly focused, postured, and resourced to meet current and emerging threats, particularly those posed by China’s techno-authoritarianism.

However, the United States will struggle to meet these challenges without fully informed policymakers, buy-in from allies, and respect from adversaries. And the current politicization of intelligence will make it difficult, if not impossible, to establish those conditions.

Biden’s lift to raise the intelligence community above the all-consuming partisan conflict in the country will be heavy.

President Trump has demoralized the intelligence community and turned it into a political weapon, reducing intelligence agencies to public relations outfits by twisting objective analyses into part of his campaign machine. He has compared intelligence officials to Nazis, taken the word of Russian President Vladimir Putin over consensus intelligence community assessments, installed spy chiefs on the merit of loyalty alone, prevented critical intelligence from reaching Congress and the public, and selectively released information to advance his political agenda.

The corrosion and bad faith run deep. Policymakers have been left unequipped to anticipate and respond to threats. Allies likely do not trust U.S. officials to secure their intelligence from adversaries, who themselves could exploit the disorder.

To insulate the intelligence community from partisanship, Biden should nominate veteran national security hands, trusted and familiar names, who can hit the ground running to head these agencies. For example, he could hold over Christopher Wray at the FBI, as requested by the men and women of that agency, and put forward someone like Sue Gordon or Michael Morrel to lead the CIA.

Biden will also need to identify and hold accountable those in leadership positions who have been supportive and complicit in the politicization of intelligence under President Trump, increase the independence of inspectors general, and strengthen whistleblower protections.

In a speech at the swearing-in ceremony of Leon Panetta as CIA director in 2009, Biden said to the intelligence community, “We expect you to tell us the facts as you know them, wherever they may lead, not what you think we want to hear. And we expect you to give us your best judgment. We will ask no more, but we will ask no less.” Intelligence must be depoliticized to meet that expectation.

These steps to make the intelligence community whole and healthy are not an end in themselves. They are required to adapt and modernize the agencies in order to combat the global resurgence of authoritarianism being led by China—and to do so quickly.

Over the last two decades, with Washington policymakers focused on the war on terror, China has transformed itself into a nation with enough economic, technological, political, and military capacity to contest the international system of democratic rules and norms underpinned by U.S. leadership.

While China is not the only national security threat to the United States, it is the largest and will be the most lasting. Biden will need to realign the intelligence community’s resources to recruit, retain, and invest in the individuals, skills, and technologies necessary to meet the challenge. A Manhattan Project-like effort will be necessary to ensure the United States does not fall behind in developing and deploying the emerging technologies that will dictate the future of geopolitics.

In short, Biden will have to rebuild and reshape the intelligence community to make sure that the United States and its democratic allies maintain influence over the norms and standards that guide international cooperation, competition, and conflict. It is no small task.

Joseph Bodnar is a program assistant at the German Marshall Fund's Alliance for Securing Democracy. He is also a graduate student at American University's School of International Service.