Joe Biden's War on Guns Has a New Target: "Silencers" 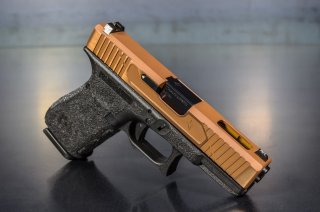 Leave it to lawmakers to express concern for something that isn't likely a problem.

Weeks back, New Jersey Democrats Sen. Bob Menendez and Rep. Bonnie Watson Coleman introduced legislation that would ban so-called "silencers." This isn't the first time Menendez has sought to ban the manufacture or sales of the sound-reducing firearm accessory.

The 2021 Help Empower Americans to Respond (HEAR) Act is an update of a bill he first introduced in 2019 after the Virginia Beach mass shooting that left a dozen people dead.

"Gun silencers are dangerous devices with one purpose and one purpose only – to muffle the sound of gunfire from unsuspecting victims," Menendez said in a Thursday statement. "The sound of gunshots is what signals you to run, hide, take cover, call the police and help others save themselves; however, this is nearly impossible when a gun silencer is used."

Menendez must watch too many movies because suppressors, which are what the industry actually calls the devices, don't actually "silence" guns, but simply reduce the decibels that sound when a gun fires. However, the pair of lawmakers are still calling for a ban of the sale, manufacturer, importation, transfer and possession of "silencers."

The New Jersey senator called the bill a "commonsense legislation that will prevent armed assailants from using these deadly devices to make it easier to shoot and kill another person." His colleague Watson Coleman has also labeled silencers a "tool of murder" in a statement.

"They have no legal application, which is why law enforcement officials around the country have been calling for their elimination," Watson Coleman added, and further suggested that the HEAR Act "will save lives and is part of the common-sense approach to firearms legislation that polls show has widespread support among voters on both sides of the aisle."

According to FoxNews, cosponsors of the legislation include Democratic Sens. Dianne Feinstein of California, Richard Blumenthal of Connecticut, Cory Booker of New Jersey, Ed Markey of Massachusetts, and Alex Padilla of California.

If passed the HEAR Act would authorize a silencer buyback program, which would give Americans a ninety-day grace period to comply. There would be limited exceptions for law enforcement and Atomic Energy personnel.

It is unclear if Sen. Menendez understands that suppressors are actually already a highly regulated item, and aren't something gun owners can walk into a gun store and buy. Since the passage of the Gun Control Act of 1968, they are illegal to own or possess without a Title II registration and transfer that requires a $200 tax fee in addition to the cost of the suppressor, as well as an extensive background check, which involves name, fingerprints, and photos kept on file.

Because of the extensive background checks, the use of these in crimes has been limited. Moreover, as the Western Criminology Review noted, "The data indicates that use of silenced firearms in crime is a rare occurrence, and is a minor problem."

The Western Criminology Review also reported, "One of the harshest penalties in the federal system is a 30-year mandatory minimum sentence for possession of a silencer (used to reduce the noise of a gunshot) during a 'crime of violence' or drug trafficking."

It should be added the thirty-year mandatory sentence is for a first offense while a repeat offender would face not less than life in prison.

In the case of the Craddock mass shooting, it was also reported that his familiarity with the building where he had worked, as well as his military background, likely gave him a tactical advantage. The use of the suppressor, other than making it more comfortable for him to shoot, likely didn't aid in his rampage.

Advocates of suppressors have also argued that the devices can guard against hearing damage for sport shooters, while also limiting noise complaints from neighbors who happen to live near gun ranges and hunting grounds.