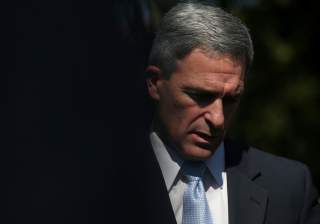 A federal judge ruled that Ken Cuccinelli was illegally appointed to lead a top immigration post last year and invalidated some of his directives.

Cuccinelli was illegally appointed by the Trump administration to head U.S. Citizenship and Immigration Services (USCIS), according to a 55-page rulingissued Sunday by Judge Randolph Moss of the U.S. District Court in Washington, D.C., an Obama-appointed judge. Moss also found that a directive launched under Cuccinelli, which hastens screening time for asylum seekers, should also be voided.

President Donald Trump tapped Cuccinelli to lead USCIS — the agency under the Department of Homeland Security (DHS) that manages the country’s legal immigration system — in June 2019. Cuccinelli, a former Virginia attorney general, was later named as acting DHS deputy secretary, making in the second most senior appointed official in the department.

During his time at USCIS, Cuccinelli aggressively pushed the president’s immigration agenda. While he no longer leads the day-to-day operations at the agency, he is still listed as the “Senior Official Performing the Duties of the Director, U.S. Citizenship and Immigration Services; Director,” on the USCIS website.

Moss on Sunday ruled that Cuccinelli’s appointment violated the Federal Vacancies Reform Act of 1998, finding that he was not actually eligible to become USCIS director because the position he initially assumed — the principal deputy — was not a “first assistant” job under the auspices of the 1998 law.

“On the merits, the Court concludes that Cuccinelli was not lawfully appointed to serve as acting Director and that, as a result, he lacked authority to issue the reduced-time-to-consult and prohibition-on-extensions directives,” Moss concluded in his ruling.

Cuccinelli issued a directive in July that sped up the time the time asylum officers can interview and hear an individual case once they are detained — from 48 hours to one calendar day. Moss found that this order should be “set aside.”

During a Monday morning appearing on Fox News, Cuccinelli told the public to “expect an appeal” to the judge’s ruling.

“The only issue in the case is related to being the acting director at USCIS, and this ruling is really something of an outlier. This is a methodology that’s been used in the past that’s thought of as as legal on, you know, pretty broadly,” Cuccinelli said on Fox & Friends. “So you can expect an appeal, and we’ll take intermediate steps to avoid any challenges, but it doesn’t affect anything we’re doing going forward and Joe Edlow [Cuccinelli’s successor] is there at the helm today.”

Cuccinelli added that, for the directives that have been invalidated, they will simply be reissued as a precautionary measure as the court case moves forward.