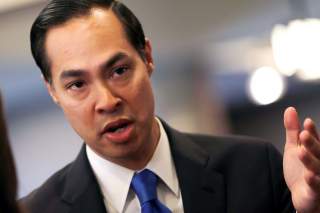 Democratic presidential candidate Julian Castro, a fervent opponent of the Trump administration’s immigration agenda, was called out for his past praise of former President Barack Obama’s immigration enforcement policies.

“I want to ask you about immigration which you have made a part of your campaign focus,” said “Face the Nation” host Margaret Brennan Sunday. “When you were mayor of San Antonio, you testified before Congress and you called for increased border security measures and you praised the Obama administration’s actions.”

Brennan then played a clip of Castro speaking before a congressional hearing in February 2013. In the clip, then-San Antonio Mayor Castro is seen lauding the Obama administration’s success at removing “dangerous individuals” after beefing up security along the U.S.-Mexico border.

“In Texas, we know firsthand that this administration has put more boots on the ground along the border than at any other time in our history which has led to unprecedented success in removing dangerous individuals with criminal records,” he said during a 2013 House Judiciary committee hearing.

“Why did you praise that policy then but when the Trump administration adopt similar language and policies you’re hypercritical of them?” Brennan asked.

Castro, who went on to serve as secretary of Housing and Urban Development under the Obama administration, maintained that his position has not changed, and that he’s always been in favor of removing criminal illegal aliens from the U.S.

“I talked about people who committed serious crimes, dangerous criminals. I haven’t changed at all. If there are people who have committed serious felonies in the United States who are immigrants or who come to the border … they should be deported,” he said in response.

Castro has stood out among the other Democratic presidential candidates for his extreme positions on immigration.

During the second Democratic debate in June, every candidate on stage raised their hand in support of providing government-funded health care to illegal immigrants. Most of the candidates, including Castro, raised their in support of decriminalizing illegal immigration itself. Castro blamed President Donald Trump’s metering policy on the deaths of a father and daughter who attempted to swim across the Rio Grande river.

The former HUD secretary also called for the removal of the law that makes it a felony to re-enter the country illegally more than once. He even supported legislation that eliminates the words “alien” and “illegal alien” from the federal government’s legal code.

While Castro maintained that his position is consistent with the comments he made in 2013, he did not appear prepared at the time to address the nuanced issues that come with only removing illegal aliens who have already committed crimes.

“If we have someone here who is here illegally, and not one of those hard-working people, but someone who is a member of a violent criminal gang, should we be prepared to deport them before they commit a criminal act, or should they also have a path to citizenship?” former Virginia GOP Rep. Randy Forbes asked Castro during the 2013 hearing, according to archived testimony.

“With regard to the hypothetical of people who might commit a crime or might not commit a crime, you know, I readily concede that I am not in law enforcement, I am not a technical expert in that regard, but I do believe that folks who have committed a violent crime should be deported,” Castro answered.