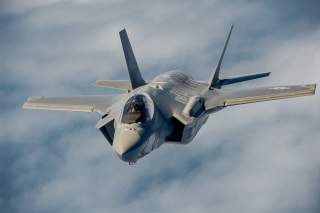 The 23 U.S. military F-35 stealth fighters in the test fleet at Edwards Air Force Base in California achieved a “fully mission capable” rate of just 8.7 percent in June 2019, according to the F-35 program office.

That’s equivalent to around two F-35s that are fully ready for testing.

An expert with the Washington, D.C. Project on Government Oversight described the test force’s readiness rate “abysmal” in a recent report on their website. The low mission-capable rate underscores ongoing problems with the F-35’s design, testing and production and could weigh on the Pentagon’s efforts to accelerate F-35 production and boost the readiness of the frontline fleet.

“A fully mission-capable aircraft can perform all of its assigned missions, a particularly important readiness measure for multi-mission programs such as the F-35,” POGO’s Dan Grazier explained in the report.

“The June [2019] rate was actually an improvement over the previous month, when the fleet managed a rate of just 4.7 percent. Since the beginning of operational testing in December 2018, the fleet has had an average fully mission capable rate of just 11 percent.”

Aircraft mission-capability statuses can be degraded for reasons including a lack of spare parts or a failure in a mission system like the radar or electronic warfare instruments.

According to sources within the F-35 program, a frequently failing component is the Distributed Aperture System. This system provides the pilot warnings of incoming missiles and generates the imagery for the $400,000 helmet that the pilot wears.

The F-35 can still fly with problems like this, and, using the data links between aircraft, some of the information from a functioning system on another F-35 can fill in a blind spot in a degraded one.

But this only works up to a point, and to fully test the program’s capabilities, all systems must function properly.

Former secretary of the army Mark Esper, who is Trump’s nominee to replace Mattis, in mid-July 2019 told a Senate committee the roughly 300-strong fleet of F-35s belonging to the U.S. Air Force, Navy and Marine Corps “is not expected” to meet Mattis’s readiness goal.

“Transparency supply shortages continue to be the main obstacle to achieving this,” Esper told the committee. “We are seeking additional sources to fix unserviceable canopies.”

The Government Accountability Office highlighted the canopy shortage in an April 2019 report. The F-35’s canopy, which features a special coating that reflects radar waves and prevents them from bouncing off the inside of the cockpit -- a potentially major source of radar returns -- “failed more frequently than expected,” the GAO pointed out.

Lockheed Martin, which builds the F-35, searched for an additional subcontractor to help boost canopy-production, the GAO reported.

Meanwhile, new performance problems with the F-35 also have come to light. Defense News in June 2019 obtained military documents detailing a wide range of serious problems with two of the three versions of the F-35.

The Air Force’s F-35A appears to be exempt from the latest flaws, but the Marine Corps’ vertical-landing F-35B and the Navy’s carrier-compatible F-35C both suffer what the services call “category 1” deficiencies.

In military parlance, a category-1 flaw in a plane can prevent a pilot from accomplishing their mission.

One problem cropped up during test flights in 2011, Defense News reported, citing the trove of military documents. In the 2011 tests, at least one F-35B and F-35C both flew at speeds of Mach 1.3 and Mach 1.4. A post-flight inspection in November 2011 revealed the F-35B sustained “bubbling [and] blistering” of its stealth coating.

Further supersonic tests in December 2011 revealed structural damage on an F-35C resulting from the extreme heat coming from the plane’s single Pratt & Whitney engine, one of the most powerful fighter engines ever made.

To avoid similar damage, the military has limited F-35B and F-35C pilots to flying at supersonic speed for less than a minute at a time.

The test reports Defense News obtained reveal a second, previously little-known category-1 deficiency in the F-35B and F-35C aircraft. If during a steep climb the fighters exceed a 20-degree “angle of attack” -- the angle created by the wing and the oncoming air -- they could become unstable and potentially uncontrollable.