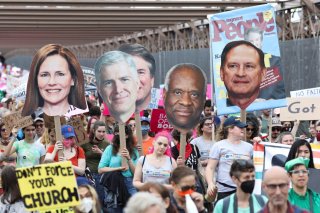 Within hours of the publication of the leaked first-draft opinion in Dobbs v. Jackson Women’s Health Organization suggesting that the Supreme Court will overrule Roe v. Wade and Planned Parenthood v. Casey, Senate Majority Leader Charles Schumer (D-NY) and House Speaker Nancy Pelosi (D-CA) issued a joint statement accusing “Republican-appointed Justices” of having “lied to the U.S. Senate.” Two days later, Schumer identified the “lie” as “misrepresenting their views” during their confirmation hearings “on respecting precedent when it came to decisions like Roe.”

There is definitely some serious misrepresentation going on about what was said in those hearings about Roe and Casey, but it’s not coming from the Justices.

Some members of Congress went even further than Schumer. Sen. Kirsten Gillibrand (D-NY), for example, claimed that “several Supreme Court justices, including Justice Alito … stated during their confirmation hearings that they would not overturn Roe v. Wade. Every single one of them said … under oath, that they would actually preserve Roe.”

No Supreme Court nominee has ever come close to saying any such thing about any precedent. In fact, for decades, nominees of both parties have studiously avoided giving even what Justice Ruth Bader Ginsburg described in her 1993 hearing as “hints … forecasts … [or] previews.” Transcripts of those hearings, which are available here, here, and here, show exactly what the Justices said and expose how accusations of “lying” are pure fiction.

During the September 2005 hearing on John Roberts’ nomination to be chief justice, then-Sen. Joe Biden (D-DE) compared such gatherings to a “kabuki dance.” Senators try to determine how nominees will vote or write regarding certain issues, while nominees resist pressure to show their judicial hand. Nominees, for example, decline to say whether particular precedents either were correctly decided or should be overruled and often refer to precedents as “settled.” Schumer now claims this word is a promise to oppose overruling a precedent.

Every Supreme Court nominee who has referred to a precedent as “settled” has not only meant the same thing but has even defined it during their hearings. A precedent is settled because it is a precedent—that’s it, nothing more. Calling a precedent “settled” means only that it exists and says absolutely nothing about whether it could, or should, be unsettled. In Justice Samuel Alito’s January 2006 hearing, Sen. Richard Durbin (D-IL) asked if Roe v. Wade “is the settled law of the land.” Alito responded that “settled” did not mean “it can’t be re-examined.” Instead, “settled” means that Roe is “a precedent that is entitled to respect as stare decisis.”

In her July 2009 hearing, Justice Sonia Sotomayor explained that “[a]ll precedents of the Supreme Court I consider settled law subject to the deference [which the] doctrine of stare decisis would counsel.” She gave the identical response about whether several individual precedents were settled: “That is the precedent of the Court, so it is settled law.” Asked about Casey in particular, Sotomayor repeated that it “is the precedent of the Court and settled in terms of the holding of the Court.”

Justice Elena Kagan followed the same script during her July 2010 hearing. District of Columbia v. Heller and McDonald v. Chicago, holding that gun bans violated the Second Amendment, are, Kagan said, “settled law” and are “entitled to all the respect of binding precedent.” She put in the same “settled” category precedents such as Citizens United v. FEC, holding that restrictions on election-related expression violated the First Amendment; Gonzalez v. Carhart, finding the federal Partial-Birth Abortion Ban Act constitutional; and United States v. Lopez and United States v. Morrison, which held that two federal statutes exceeded Congress’ authority to regulate interstate commerce. Kagan explained to Sen. Jeff Sessions (R-Ala.) that she did not distinguish between “precedent” and “settled law.” She was crystal clear: “What I mean to say when I use those phrases is, these are decisions of the court.”

The fact that Schumer enthusiastically supported Sotomayor and Kagan proves that he knew exactly what they meant. After all, he has said that “overturning Citizens United is probably more important than any other single thing we could do to preserve this great and grand democracy.” He would never have supported a Supreme Court nominee who pledged never to consider overruling Citizens United or the other precedents Kagan called “settled.”

Republican nominees have carefully duplicated the Sotomayor/Kagan strategy. During Gorsuch’s March 2017 hearing, for example, he told Sen. Al Franken (D-MN) that Obergefell v. Hodges, holding that the Constitution protects a right to same-sex marriage, is “absolutely settled law.” Similarly, Gorsuch told Sen. Richard Blumenthal (D-CT) that Griswold v. Connecticut and Eisenstadt v. Baird, which created and extended a constitutional right to use contraception, “are precedents of the U.S. Supreme Court” that “have been settled.” He told Sen. Chris Coons (D-CT) that Casey, Lawrence v. Texas, which created a right to same-sex sodomy, and Obergefell are all “settled law in the sense that [they are] decision[s] of the U.S. Supreme Court, entitled to the weight of precedent.”

Kavanaugh’s September 2018 hearing followed the same pattern, with Sen. Dianne Feinstein (D-CA) asking “what do you mean by ‘settled law’?” Kavanaugh could have been reading from the Sotomayor hearing transcript: “Senator, I said that it is settled as a precedent of the Supreme Court.” Blumenthal asked if Kavanaugh would “[c]ommit, sitting here today, that you would never overturn Roe v. Wade.” Kavanaugh gave the expected response: “Senator, each of the eight Justices currently on the Supreme Court, when they were in this seat, declined to answer that question.”

Similarly, in her October 2020 hearing, Justice Amy Coney Barrett told Feinstein that Obergefell “is a precedent of the Supreme Court entitled to respect under the doctrine of stare decisis.” Barrett said the same thing to Durbin about decisions upholding the Affordable Care Act and to Sen. Sheldon Whitehouse (D-RI) about United States v. Virginia, which struck down single-sex education at the Virginia Military Institute, and Bostock v. Clayton County, construing Title VII of the 1964 Civil Rights Act as barring employment discrimination on the basis of sexual orientation or gender identity.

Republicans did not flinch at Republican nominees calling these precedents “settled” any more than Schumer did when Kagan put Citizens United in that category. Each nominee chose to use that label precisely because, at least in the Supreme Court confirmation context, it provides a way to respond while not compromising impartiality. Asked by Durbin what she meant by “settled,” Barrett also echoed Sotomayor: “Any precedent entitled to respect under the doctrine of stare decisis could be characterized as settled.” In other words, every precedent is settled.

Notice that, when referring to precedents as “settled,” nominees also add phrases such as “respect as stare decisis” (Alito), “entitled to all the weight that precedent usually gets” (Kagan), “entitled to the weight of precedent” (Gorsuch), “entitled [to] respect under principles of stare decisis” (Kavanaugh), and “respect under the doctrine of stare decisis.” Just as “settled” means a precedent exists, these phrases refer to the process of determining whether a precedent should be overruled. The factors used in this process are well known and have resulted in the Supreme Court overruling its own precedents hundreds of times.

While Sotomayor said that “all precedents of the Supreme Court I consider settled,” she has voted several times to overrule them. So has Kagan, who said that “settled” means nothing more than “precedent.” If, as Schumer claims today, “settled” means “immune from overruling,” then Sotomayor and Kagan must also have lied to the U.S. Senate.

This confirmation hearing strategy is well established and has been followed consistently by nominees of both parties. The public record is clear. No one, especially members of Congress, who even casually follows the Supreme Court confirmation process would fail to grasp something so clear. The obvious conclusion is that Schumer and others who claim that Justices lied or misrepresented their views about overruling Roe or Casey are, well, lying or misrepresenting those Justices’ actual views.

Thomas Jipping is a senior legal fellow in The Heritage Foundation’s Meese Center for Legal and Judicial Studies.