The Kalashnikov USD KR-103 is Ready for the Range 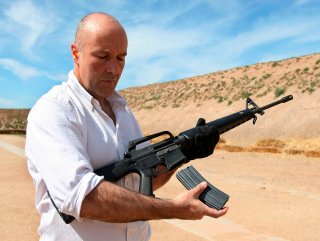 There is absolutely no denying that the American-designed AR platform, developed by the late great Eugene Stoner, remains one of the best small arms of all time. While gun control advocates may hate it, shooters love it. At the same, it is easy to appreciate the simplicity and ruggedness of the AK-47.

Unfortunately, the Biden administration has made it difficult for American shooters to obtain a true Russian-made civilian version of the AK. In August, pursuant to the Chemical and Biological Weapons Control and Warfare Elimination Act of 1991 (CBW Act), the United States imposed a second round of sanctions on the Russian Federation over its use of a "Novichok" nerve agent in the August 2020 poisoning of Russian opposition figure Aleksei Navalny. While the sanctions were aimed at the Putin regime, it is actually the American firearms enthusiast that is being punished.

However, that doesn't mean that you can't buy an AK today. In fact, last year Kalashnikov USA introduced its KR-103 rifle, a semi-automatic version of the AK-103, the twenty-first-century version of Russia's infamous AKM (Avtomat Kalashnikova Modernizirovanny) Rifle, chambered in the Soviet 7.62x39mm caliber. The AK-103 was one of the last designs overseen directly by the late Mikhail Kalashnikov, the designer of the original AK-47.

The privately-owned Kalashnikov USA (KUSA) was founded in 2011 to design and manufacture Kalashnikov-style firearms for law enforcement, military, and commercial markets. The company, which has no ownership connections to the Russian-based Kalashnikov Concern, is headquartered in Pompano Beach, Florida as a subsidiary of RWC Group (Russian Weapons Company) LLC. Due to sanctions that banned the importation of Russian-made firearms, in response to the Russian military intervention in Ukraine, the company announced in June 2015 that it would begin selling only U.S.-manufactured firearms.

Earlier this year the company introduced its Vityaz submachine gun for military and law enforcement customers. It is based on the AK-style SMG developed in Russia at the turn of the twenty-first century.

The American AK is Born

The KR-103 is truly "East meets West"—featuring Kalashnikov's time-tested design and original Russian specifications while being constructed of parts made entirely in the United States and assembled by American workers. It will accept all AKM and AK74 furniture and accessories. It features a forged trunnion, forged carrier, side optic rail, chrome-lined barrel, cleaning rod, and U.S.-made 7.62mm steel reinforced polymer magazine that promises to be every bit as reliable as the Russian mags produced at the famous Izhmash or Tula arsenals in Russia.

For this fall, Kalashnikov USA has introduced its KR-103 Go Kit, a simple straightforward package aimed at the AK 7.62 enthusiast. It includes four 7.62x39mm magazines, a Krebs enhanced safety with a bolt hold-open feature as well as the Echo 93 two-point/one-point convertible sling and the company's full optics side mount.