Kamala Harris: 'Donald Trump Is the Greatest Threat to the National Security of Our Nation' 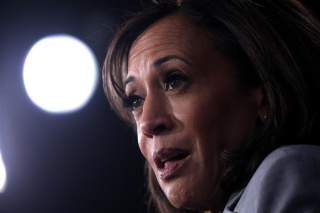 Harris was asked if she would make concessions to North Korean leader Kim Jong Un to keep talks going between the two countries if she became president. The California senator immediately went after Trump for his talks with the country, saying he “got punked” and naming the American president as the number-one threat to America’s security.

“What Donald Trump has done from pulling out of the Paris agreement, to pulling out of the Iran nuclear deal, to consistently turning a back on people who have stood with us in difficult times — including most recently the Kurds — points out that Donald Trump is the greatest threat to the national security of our nation at this moment,” Harris said.

The question was angled around the news that North Korea threatened to cancel all future summits if Trump doesn’t agree to make concessions on nuclear weapons.

“He has conducted foreign policy since day one born out of a very fragile ego that fails to understand that one of the most important responsibilities as the commander-in-chief is to concern herself with the security of our nation and homeland,” Harris continued.

“And to do it in a way that understands that part of the strength of who we are as a nation, and therefore an extension of our ability to be secure, is not only that we have a vibrant military, but that when we walk in any room around the globe, we are respected because we keep to our word, we are consistent, we speak truth, and we are loyal.”

The moderator then asked the question again, as Harris failed to answer the first time. Harris replied and said she would not make concessions to North Korea at this time.