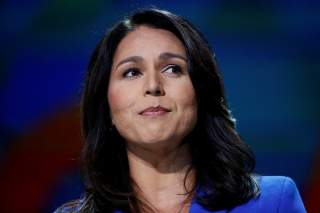 Sen. Kamala Harris referred to herself as a “top-tier candidate” and belittled Rep. Tulsi Gabbard’s poll numbers during an interview after Wednesday’s Democratic presidential debate.

“[T]his is going to sound immodest, but I’m obviously a top-tier candidate, and so I did expect that I would be on the stage and take hits tonight, because there are a lot of people that are trying to make the stage for the next debate,” Harris said in an interview with CNN’s Anderson Cooper shortly after the debate.

“Especially when some people are at zero or 1%, or whatever she might be at. So I did expect that I might take hits tonight,” she continued, making a clear reference to Gabbard.

Harris was miffed that Gabbard called on her to apologize for her record as San Francisco district attorney and California’s attorney general.

“There is no excuse for that and the people who suffered under your reign as prosecutor. You owe them an apology,” Gabbard said to Harris in a brutal debate stage takedown.

Gabbard then offered a scathing review of Harris’ prosecutorial record.

“She put over 1,500 people in jail for marijuana violations and then laughed about it when she was asked if she ever smoked marijuana,” said Gabbard, referring to Harris admitting in February that she smoked marijuana as a student at Howard University.

During her campaign for attorney general in 2010, Harris opposed a ballot proposition that would have legalized recreational marijuana use. She has since reversed course on the issue and says she supports legal pot.

“She blocked evidence that would have freed an innocent man from death row until the courts forced her to do so. She kept people in prison beyond their sentences to use them as cheap labor for the state of California,” added Gabbard.

Van Jones, a CNN commentator, said he was surprised by the Gabbard-Harris exchange because it was a rare moment of vulnerability for Harris, who won wide praise following the Democratic debates held last month.

“I didn’t think anybody could survive laying a glove on Kamala Harris,” Jones said in post-debate analysis.

“That says there’s some steel in Tulsi Gabbard,” he added.

In her post-debate interview, Harris also accused Gabbard of being an apologist for Syrian dictator Bashar Assad. Gabbard met with Assad in Syria in 2017 and has largely avoided criticizing the Syrian leader for chemical weapons attacks on his citizens.

“I can only take what she says and her opinion so seriously.”

In an interview of he own with Cooper, Gabbard said that “I do not dispute that” when asked whether Assad is a murderer and torturer.

Ian Sams, the Harris campaign’s communications director, echoed his candidate’s remarks on Twitter. During the debate, he accused Gabbard of being an Assad apologist and of lying about Harris’ record.

It’s a lie offered up by an Assad apologist. https://t.co/5ns5DKHzVq

In one tweet, he directed journalists to an NBC News report earlier this year that claimed that Gabbard was the favored Democratic candidate of Russian bots.

Reporters writing their stories with eyes on the modern-day assignment desk of Twitter, read this:

“The Russian propaganda machine that tried to influence the 2016 election is now promoting the presidential aspirations of a controversial Hawaii Democrat”https://t.co/2kpKQqW3Ir

Harris has already been caught misrepresenting alleged Russian propaganda activity. She claimed in a radio interview on July 12 that she had been subjected to Russian bot attacks on social media sites like Twitter.

But CNN debunked the claim days later, reporting that Twitter saw no evidence that Russian bots were targeting Harris.