Kazakhstan’s Bet on the Future 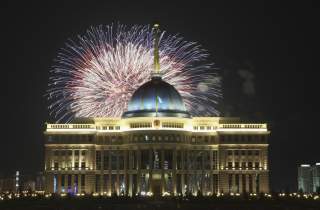 In the twenty-first century, countries that traditionally added value by extracting natural resources are doing their best to diversify their sources of income. Financial services are becoming one of the alternatives to oil and gas.

Canada, Dubai, Abu Dhabi, even Morocco are developing their international financial sectors. Now, Kazakhstan is joining this club. It is a bold, long shot, but those who don’t risk, don’t win.

The AIFC represents but the latest in a long string of ambitious initiatives to give the Central Asian tiger a regional and global. Once known as the oil- and uranium-rich but barren launch-and-landing site for Soviet cosmonauts, Kazakhstan has transformed itself since independence twenty-seven years ago into a Eurasian juggernaut.

Its economy has grown five-fold. From 2000 to 2010, it had the second-fastest growing economy in the world after Qatar. Over the next five years, growth rates are projected at 4 percent. External debt is less than 10 percent of GDP and the country’s sovereign wealth fund exceeds $100 billion.

Yet like most extractive economies that rely on resources taken out of the ground (hydrocarbons and minerals), Kazakhstan is vulnerable to the vicissitudes of international supply and demand. Much like its oil-dependent Arabian Peninsula partners Saudi Arabia and the UAE, Kazakhstan has come to understand the necessity for a diversified economy that can leverage its geostrategic importance and burgeoning youth population to provide value-added services. The AIFC is Kazakhstan’s bet on the future.

Modeled on the financial center of Dubai, the AIFC seeks to remove country-associated risks for foreign investors by establishing independent regulatory and legal regimes that are governed by UK securities and corporate laws, visa and tax waivers, and English as the operating language.

AIFC’s special status was formalized in Kazakhstan’s Constitutional Law. The component parts of the AIFC are designed to provide a financial infrastructure that will transform Kazakhstan into the region’s leading financial center.

The AIFC Court—responsible for the settlement of disputes—will be headed by a British jurist who was the chief justice of England and Wales.

The Astana International Exchange (AIX), which will serve as the AIFC’s bourse, features the Shanghai Stock Exchange as a share-holding strategic partner. It is empowered by NASDAQ to run its tech.

The Astana Financial Services Authority (AFSA), which serves as the AIFC’s regulator and guarantor of the financial ecosystem’s integrity, will operate in accordance with IOSCO Principles of securities regulation, Basel core principles for banking supervision, IFSB’s Guiding Principles and FATF Recommendations.

So now that Kazakhstan has built this financial field of dreams, who will come? While the World Bank’s 2018 Ease of Doing Business Report ranks Kazakhstan first among 190 countries in terms of protecting minority investors and sixth in the enforcement of contracts, Kazakhstan still ranks 131st out of 176 in Transparency International’s Corruption Perceptions Index.

Asset management and private banking are mostly outsourced to foreign managers, and the financial technology is virtually non-existent.

The AIFC’s Governor and Kazakhstan’s former Central Bank chief Kairat Kelimbetov is undeterred. “Strategic location in the heart of Eurasia gives AIFC a whole host of advantages,” he said.

“Astana is ideally positioned to serve as a gateway for capital and investment in the whole region, and the Eurasian Economic Union in particular. EEU states, including Kazakhstan, benefit from a large pool of wealth, and there is a rising demand for sophisticated investment projects. Besides, the country plays a strategic role in recreating a trade corridor connecting East and West through China’s Belt and Road Initiative,” Kelimbetov says.

Whether this geopolitical calculus work remains to be seen. China is expanding westward. Russia’s economy is still recovering from recession and economic sanctions.

Global markets are experiencing low and even negative interest rates. The AIFC infrastructure, its leaders believe, may serve as the financial hub for Central Asia, Western China, southern Russia and the Eurasian Economic Union, and it may knit together the financial markets of Europe, the Persian Gulf and China.

Shares of at least five more large state-controlled companies will be floated over the next two years, culminating in the listing of national oil producer KasMunaiGas in 2020.

Kelimbetov believes that by holding exclusive rights for these IPOs, the AIFC and its trading platform the AIX have a “historic chance” to draw in sufficient liquidity to kick off the market. Furthermore, AIX’s link-up with Europe’s largest securities settlement house Euroclear will allow foreigners to purchase Kazakh stocks without having to open accounts at Kazakh depositories.

It’s an ambitious play. The world financial market watchers have their eyes on Astana.

Joseph Adam Ereli is the former ambassador of the United States to the Kingdom of Bahrain. He held the position from 2007 to 2011.