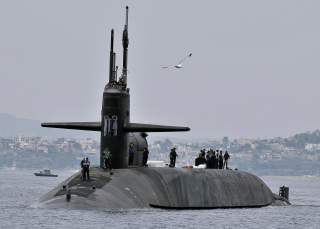 Lots of questions, but it all seems very exciting—and likely to keep planners in Beijing and Moscow scratching their heads. All a big win, no matter how you slice it and dice it. Keep your torpedoes crossed.

The mighty American nuclear-powered attack submarine: they were, at least until very recently, supposed to be the secret sauce, the big stick that America and its allies would use against China or Russia if things got ugly—and for good reason. With both nations along with Iran and others developing anti-access/area-denial (A2/AD) capabilities that make it tough for traditional power projection tools like aircraft carriers to patrol critical waterways in a crisis, stealthy American submarines seemed the best way to ensure tactical and strategic advantage—waging war below the waves of deadly A2/AD battle-networks. U.S. attack subs were even at one point the main ingredient for America’s main effort to turn A2/AD on its head, the always controversial and misunderstood Air-Sea Battle Concept.

But as all things, advantages that once seemed long-lasting can erode and decay over time. With advances in new ways to detect submarines that move far beyond simple acoustics and with China beginning to place critical sonar nets in places where U.S. submarines would surely sail in times of trouble, many have begun to worry that America’s technological sophisticated subs could become the “battleship” of the twenty-first century.

So what is America’s best and brightest to do? There has been discussion in professional circles of having American subs fight from range—i.e. turning them into something akin to underwater aircraft carriers launching undersea style drones, or what is many times referred to as UUVs, to take the fight to the enemy from a distance. And if impressive early research that is making the headlines today bares fruit, submarine-style underwater carriers could become a reality—with some important bonuses.

According to a press release from the Johns Hopkins University Applied Physics Laboratory in Laurel, Maryland, researchers have crafted “an innovative unmanned aerial vehicle (UAV) that can stay on station beneath the water, then launch into the air to perform a variety of missions.”

While such research seems to be in a very early state, such news is a promising development, for sure. If—and this is a big if—such a UAV could be scaled into something larger and adapted with an offensive role in mind, like being able to deploy out of a submarine torpedo tube or vertical launch tube, carry sensors and some sort of weapons load, the U.S. Navy would have a platform that can perform surveillance and go on the attack from distance. Such a platform could go a long way in negating the challenges U.S. submarines could face in the years to come. In fact, U.S. subs could really become underwater flattops that could conduct surveillance and attack from the air and in the water—two-domain flattops, if you will.

It gets better. The systems in the works has some interesting feature sets worth mentioning and are different than my own vision and what most experts think of when it comes to merging subs and UUVs—indeed, something far better.

The system John Hopkins is building, the Corrosion Resistant Aerial Covert Unmanned Nautical System—or CRACUNS—is described as “a submersible UAV that can be launched from a fixed position underwater, or from an unmanned underwater vehicle (UUV) [my emphasis]. A team from APL’s Force Projection Sector worked with fabrication experts in the Research and Exploratory Development Department to create a new type of unmanned vehicle that can operate effectively in two very different arenas: air and water.”

Make special note of the mention that this UAV could be launched from a UUV. Imagine this possible scenario, if the research pans out: a future U.S. attack submarines launching a drone-like UUV that goes out hundreds of miles on a surveillance or strike mission that can launch its own UAV—into the water or up into the sky. Yes and read that right, underwater drones having their own drones. Wow.

The release also raised the possibility that such a platform could be developed in large numbers, creating some amazing advantages, stating: “CRACUNS’ low cost makes it expendable, allowing for the use of large numbers of vehicles for high-risk scenarios.” Maybe UAV swarms? Yes, it’s OK to get excited now.

“Engineers at APL have long worked on both Navy submarine systems and autonomous UAVs,” explained Jason Stipes, a project manager for CRACUNS. “In response to evolving sponsor challenges, we were inspired to develop a vehicle that could operate both underwater and in the air.”

And it seems this new system could have some amazing potential. According to the release CRACUNS “enables new capabilities not possible with existing UAV or UUV platforms. Its ability to operate in the harsh littoral (shore) environment, as well as its payload flexibility, enables a wide array of potential missions” and that it can also “remain at and launch from a significant depth without needing structural metal parts or machined surfaces.”

CRACUNS also has an interesting feature that would be of extreme importance in an underwater drone: the ability to operate in the harshness of saltwater. To make that happen, researches explained that they had to seal “the most sensitive components in a dry pressure vessel. For the motors that are exposed to salt water, APL applied commercially available protective coatings. The team tested the performance of the motors by submerging them in salt water. Two months later, they showed no sign of corrosion and continued to operate while submerged.”

“CRACUNS successfully demonstrated a new way of thinking about the fabrication and use of unmanned systems,” noted APL’s Rich Hooks, an engineer who was responsible for the additive manufacturing techniques developed for CRACUNS.

All this sounds great. However, back to that big “if” again—can this all be adapted into a truly usable surveillance, and ideally, strike platform? Could this be scaled up and used as a primary UUV weapons platform or will this stay as an extension of a UUV, only being launched from larger UUVs? How much range can this have—above and below the water? What would be the sensor and weapons loadout?

As you can see in this video from APL, the design of today looks rather small and unsophisticated. Could this basic concept be developed into something much more robust? Whatever the case, the research that went into this design could always be the start of something much more advanced in the years to come, as is often the case with military tech.

Lots of questions, but it all seems very exciting—and likely to keep planners in Beijing and Moscow scratching their heads. All a big win, no matter how you slice it and dice it. Keep your torpedoes crossed.