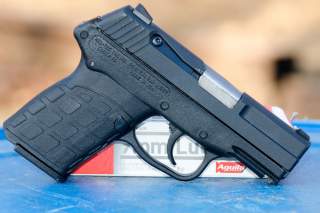 In 2019, Kel-Tec’s P3AT looks like a relic of Kel-Tec’s past. Featuring an older, pseudo-checkered grip texture instead of the regular rectangles Kel-Tec has become known for, the 9x17 (.380 ACP) pistol remains one of Kel-Tec’s most popular guns.

The P3AT, along with the P11 and P32 can be seen as Kel-Tec’s first generation of guns, designed to be single-stack, ultra-compact concealable pistols. With the P11 was in 9x19mm, the P32 in 7.65mm Browning, and the P3AT in 9x17mm, Kel-Tec covered all common carry calibers that could be fit into an ultra-compact pistol.

All three pistols share a similar polymer frame, with similar checkering and a molded “Kel-Tec” logo on the grip. Reviews on the “grippiness” of this pattern have been mixed, but in 2019 the checkering is definitely sub-par compared to modern grip textures.

But how does the P3AT stack up against the modern competition?

While striker-triggers have taken over the 9x19mm subcompact market, the 9x17mm market is very much still a double-action-only game. The P3AT’s primary competitors, the Ruger LCP and the S&W bodyguard are both double-action pistols. Only Glock and Sig Sauer buck this trend with the Glock 25, 28, and 42 models and Sig Sauer P238.

But the popularity of the Glock 42 and Sig Sauer P238 on the American market suggests that consumers want better triggers in their 9x17 compacts. Ruger appears to be following this trend, featuring a lighter trigger (with a trigger safety) in their LCP II, their follow on to the LCP. In this market of better triggers, the P3AT is left in the dust.

This begs the question though, when the Glock 42 and Glock 43 are so similar in size, what is the point in going with a 9x17 pistol? One reason is less recoil, though the Glock 43 doesn’t have overly harsh recoil. The Glock 42 is also marginally smaller, which could make a difference, but largely can be mitigated by a quality holster.

The P3AT also features incredibly tiny sights. Probably designed to avoid snagging on the draw, the sights are hard to acquire, to begin with, and very hard to acquire again after recoil. While some may say that with such ultra-compacts, point shooting is the best option, most trainers agree that one should train to use the sights. In this, the P3AT is substantially worse than most of its competition. Modern sights have become both snag-resistant and easy to pick up.

Either way, the P3AT or any of their first-generation Kel-Tec designs don’t compare well to the latest generation of subcompacts. The better trigger in modern ultra-compact Glocks makes them far more pleasant to fire and easier to be accurate with than the Kel-Tecs. Glock also doesn’t have the quality issues Kel-Tec is notorious for, and thus far better suited to being a carry pistol for that reason.