The Kel-Tec CMR-30 Rimfire Carbine: Is It is Pistol or a Rifle in Disguise? 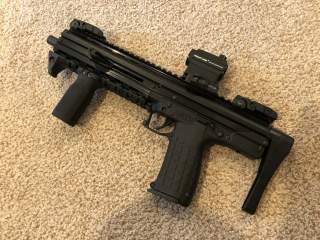 One of the most interesting long gun designs combines a small-caliber cartridge with a blowback action and wire stock, resulting in a compact plinking or hunting rifle for enjoyment in the outdoors. The Kel-Tec CMR-30 rimfire carbine is pistol-like in appearance and operation, but shouldered like a long gun. As an innovation, it pushes the boundaries in some states, in some cases necessitating minor changes to comply with legal restrictions.

At some point, Kel-Tec apparently decided to combine what it did well by creating a high capacity long gun chambered in .22 Magnum. Not a lot of firearms are chambered in .22 Magnum, an intermediary between other .22 rimfire rounds and higher power rounds. Most manufacturers choose one or the other and avoid .22 Magnum altogether. It’s worth noting however that a superior .22 Magnum round, such as 30 grain Hornady V-Max, travels at 2,200 feet per second at the barrel, or nearly Mach 2. That’s 322 foot-pounds of energy at the muzzle, and 141 foot-pounds at 100 yards. By comparison, a nine-millimeter Luger round has 335 foot-pounds of energy at the muzzle.

The use of a relatively low caliber round allowed designers to favor a blowback design, in which the recoil generated by the primer and gunpowder burn drives the action and reloads the weapon. This makes the CMR-30 relatively simple in operation and soaks up some of the recoil energy.

The CMR-30 carbine is similar to the PMR-30 pistol in some ways. The grip and lower frame of both guns are nearly identical and in both cases fit a 30-round magazine that sits flush with the bottom of the frame. The manual safety is also ambidextrous, located behind and above the grip. The collapsible stock has multiple resting positions, allowing for an adjustable length of pull. Shooters with longer arms or wearing vests or body armor might want a longer length, while those with shorter arms will appreciate the ability to shorten the stock length.

The carbine’s upper is where the long gun’s feature set really takes off. The CMR-30 has a sixteen-inch barrel with one half by twenty-eight-inch threaded tip covered by a thread protector. This makes the gun long gun legal out of the box and capable of accepting a user-supplied flash hider, muzzle brake, compensator, or suppressor where legal.

An approximately eight-inch aluminum handguard covers half of the barrel, giving the user a place to rest his non-firing hand and support the weapon. The bottom half of the handguard features a Picatinny rail for attaching weapon lights, lasers, and other aiming devices, while a monolithic rail runs on top from the tip of the handguard to the rear of the receiver. The CMR-30 comes out of the box with a set of Magpul MBUS II polymer backup sights, which are adjustable for windage, fold down and out of the way when not in use, and are even removable. The CMR-30 could easily attach other aiming devices, including Sig Sauer Romeo red dot sights, Vortex Spitfire prism sights, and others. The relatively short range of the .22 Magnum round, even with a 16-inch barrel, makes optics capable of quick target acquisition more useful than sights that enable long-distance aiming.

One of the most compelling features of the Kel-Tec carbine is its weight: just 3.8 pounds. Combined with lightweight ammunition, the CMR-30 is easy to hike into the backcountry. The gun is also very short, with a 30.6-inch overall length and a 22.7-inch length with buttstock collapsed. In some localities, California in particular, the stock would have to be pinned in order to adhere to a minimum 26 inches. Alternately, the stock could remain adjustable while the muzzle is fitted with a pinned device 3.3 inches or longer.

Short and light, the CMR-30 is an excellent backpacking gun that fits easily to the side of the rucksack. A hundred or so rounds of boxed .22 Magnum weighs little, making a nice recreational shooter for hikers and campers. The carbine also has obvious home defense potential. A very interesting and sub-AR caliber weapon, the CMR-30 is worth a look.