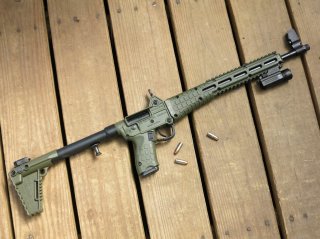 I love the Kel Tec Sub 2000 a lot, but I’ve been kind of a Kel Tec fanboy for a long time. The Sub 2000 offers some great features and performs passably, but does lack in some places. It brings something many have been wanting: a new low profile pistol caliber carbine. Let’s find out if this is your new truck gun, or just a cheap range toy.

I’ll tell you what, for a cheap gun like this, it shoots well. I reckon it's the 16-inch barrel that was helping me get my groupings to be under an inch at 50 yards. I don’t think you can ask for more from a mostly polymer weapon. The stock works as a stock should and the barrel did what barrels do; help me shoot straight. Expensive light barrels could help me improve that, sure, but the Kel-Tec Sub 2000 gets the job done, and at the end of the day, that’s what is important, and if you’re feeling frisky, you can throw an optic on that bad boy.

The Sub 2000 didn’t have any type of malfunction during my time with it. An important aspect to note is the folding hinge. When I first unfolded it, it was very stiff to open which bugged me at first, but as I thought about it more, I’m glad it was like that. There would have been a lot more trouble in the future if that weapon was swinging freely. I might be a finger short! In terms of workability, I had no issues with the Sub 2000 at all.

There’s always gonna be some things you need to sacrifice with weapons like this. The Sub 2000 is great for concealing and keeping a low profile, but keep in mind it's only a $400 pistol caliber carbine. It has mostly polymer furniture and just in terms of hand feeling, you can definitely tell this isn’t an expensive firearm, but the foldability helps even out these problems. Folded up, the Sub 2000 is about the length of a computer keyboard, you could fit that into a backpack no problem. It’s great for a bug out bag or just as a fun range toy. The issue is that there are a ton of better options out there for a small pistol carbine, and those don’t require you to unfold them in a high-intensity situation. While I liked my time with the Sub 2000, I couldn’t help feeling like it was kind of gimmicky and cheap. Speaking of cheap, you can absolutely feel that when using the Sub 2000.

If we’re being honest here (which we are), I don’t like the trigger. It is so heavy for a pistol caliber carbine. The Kel-Tec Sub 2000 has a factory trigger pull of nine to ten pounds. Crazy, right? There is a trigger kit to reduce it to 5.25 pounds, which in today’s gun culture is still pretty hefty with all these new three-pound triggers in the market. The only pro is that it is a functional trigger, but triggers have never been a dealbreaker for me.

I got my Sub 2000 in 9mm (there are other calibers available), so my weapon is compatible with Glock 19 and 17 magazines. Those magazines are plentiful and cheap, so I consider that an absolute win. I’ve used Glocks and their magazines for a long time so operating this weapon was second nature to me. The design of the magwell and related parts is similar to almost any other magazine operated firearms you’ve used before. The Kel-Tec Sub 2000 fits in well with its other magazine operated compatriots and is an advantage for usability since most will immediately understand the operation of this weapon.

The folded length is the biggest selling point of this firearm. It comes in at 16 inches while folded, which is incredibly low profile and is a huge plus if that’s what you’re looking for. It fits easily into a bookbag and is easy to conceal in a car or truck if that’s your fancy. The weight is probably more than you’re expecting, but still not a significant amount. It weighs in at about four pounds. I was very satisfied with the size of this weapon, folded and unfolded.

Since my Sub 2000 was only chambered in 9mm, the recoil was basically a non-issue. When unfolded the Sub 2000 is a rifle length weapon with a stock. The stock provided a third point of contact to mitigate kick and it was easy to get a good handle on the foregrip of the gun. All of these features make for a relatively flat shooting gun. As a result, this weapon doesn’t feel like you need to fight for control when shooting.

The Kel-Tec Sub 2000 has an outstanding price of only $399! It has some issues, but you just can’t be that price. Similar firearms can cost you thousands of dollars, but the Sub 2000 gets the job done. It ain’t pretty, but it’ll get you where you need to go.

I honestly had a lot of fun with the Kel-Tec Sub 2000. It’s cheap, accurate, reliable(so far), and it fits in my everyday backpack. Not to mention, it’s only $400. I don’t know if I’d trust it with my life, but I sure as heck enjoyed my time with the Sub 2000. It isn’t pretty or that comfortable, but there’s just something about it that makes range day enjoyable.