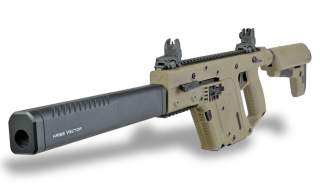 Are you looking for something a little different in a gun?

A carbine that’s fun and accurate to shoot? Would you like to try a semi-auto you’ve seen in popular video games, but as a rifle without requiring special permits? Then the Kriss USA Vector Gen II CRB is what you’re looking for.

The Kriss Vector Gen II is a pistol-caliber carbine (chambered in .45 ACP and 9mm) featuring Kriss’s unique Super V delayed-blowback system. Instead of pushing back on you the shooter, the force of the recoil redirects downward into the gun. This means less of a kick while shooting, and it helps keep your aim steady. This is especially important when you’re shooting lots of rounds at a time.

The delayed-blowback internals of the Gen II CRB gives it a different look and feel from most guns. The non-reciprocating charging handle lies flush against the gun on the forward left side. The bolt release is below the charging handle, in case you want to lock the bolt back or drop it back into place. And, the mag release is on the front of the magazine well on the left side (more on this later).

So what else sets this carbine’s appearance apart? The 16” barrel is actually a barrel shroud, which has a fairly flat, almost rectangular look. There are 13” of picatinny rails along the top of the gun, and a few more inches underneath in front of the magazine well. The Kriss Vector also comes with flip-up Magpul MBUS sights.

The skeleton of the gun is nitride-treated steel, but what you really see is the polymer housing around it. This casing has several Cerakoted finish options, including Black, Flat Dark Earth, Olive Drab Green, Combat Grey, and Alpine White.

This CRB is also super versatile. It uses Glock pattern magazines, which are common, reliable, and familiar to most enthusiasts. You can easily disassemble the Kriss Vector (no tools needed) to switch lower receivers and try a different caliber. And you have even more options for your CRB with its M4 stock adapter (and adjustable M4 stock).

Now the real question: can it shoot? Not only is the Kriss Vector Gen II accurate, it really does deliver in terms of lessening felt recoil and muzzle climb. Also, shooters typically enjoy the crisp break of the trigger pull, and they find the Kriss Vector a very enjoyable carbine to use.

So it looks neat and it can shoot, but what is it like to buy a Kriss Vector Gen II CRB? Well, one of the potential disadvantages of this gun is its price tag of about $1,500, give or take. But at least its specs comply with rifle standards, so the Kriss Vector does not require a special permit or extra taxes in most states.

Does every person need a Kriss Vector Gen II CRB? Honestly, probably not. It’s too expensive for many people to have as a basic self-defense weapon. And it wouldn’t work for super long-range or big game hunting, either.

But what if you’re a collector or an enthusiast, and maybe you don’t mind spending a little dough on a gun? Then this carbine is a fun, accurate, and easy gun to use. The Kriss Vector Gen II CRB delivers on its promises of smooth and accurate, rapid-fire shooting abilities. And living up to its word and generally overdelivering on the experience is good enough for me.

Richard Douglas is a firearms expert and educator. His work has appeared on large publications like The Armory Life, Daily Caller, American Shooting Journal, and more. In his free time, he reviews optics on his Scopes Field blog.