Kel-Tec's PF9 Gun: The Best Pocket Pistol On the Planet? 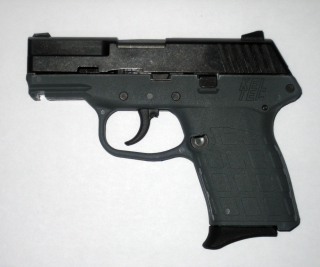 Key Point: Worth your time or a waste of time?

The PF9 is, like most modern semi-automatic handguns, made from a combination of lightweight polymers where possible and metal where necessary. The slide is made from 4140 ordnance steel and CNC machined from a single block of material. The barrel is also made from 4140 steel and button rifled as well. The frame is manufactured from Dupont 8018 high impact polymer with a 7075 T-6 aluminum frame containing the fire control group inserted inside.

Shooters aim the PF9 with a set of built in, adjustable three dot sights. The rear sight is windage adjustable, moving left or right. Alternately, there is a short rail underneath the barrel for mounting aftermarket aiming lights and lasers.

Kyle Mizokami is a writer based in San Francisco who has appeared in The Diplomat, Foreign Policy, War is Boring and The Daily Beast. In 2009 he cofounded the defense and security blog Japan Security Watch. You can follow him on Twitter: @KyleMizokami. This piece was originally featured in August 2019 and is being republished due to reader's interest.