KelTec SUB2K CQB Integrally Suppressed Might be Worth the Wait 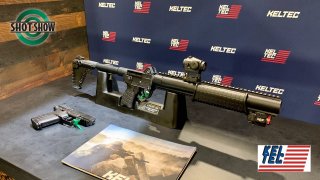 When firearms manufacturer KelTec introduced its SUB 2000 CGQ Integrally Suppressed Carbine at this year’s SHOT Show (Shooting, Hunting, Outdoor Trade Show), two proverbs should have come to mind. The first, the ancient Egyptian “silence is golden,” and the other from President Abraham Lincoln who said, “good things come to those who wait.”

Both are completely fitting for the SUB 2000 CQB (Carbine Quiet Barrel), which is an integrally suppressed PCC carbine. Offered in 9-millimeter or .40 caliber Smith & Wesson, it can fold up and tuck away to be one of the most compact shooters out there. It has the same exact grip and stock assembly of the Gen 2 Sub 2000 but it features an integrally suppressed barrel assembly. Because it has a full 16-inch barrel—including 4.25 inches of which is the actual rifled barrel—it isn’t a short-barreled rifle, but because of the suppressor it still requires a tax stamp to be purchased.

It is designed to be easily disassembled for cleaning without tools and weighs just 4.25 pounds, and like other KelTec products will accept Glock magazines, as well as those from SIG Sauer, Beretta and other manufacturers.

The first question that comes up with such concepts is who exactly needs a “silenced” firearm—and many gun control types would suggest this is somehow the “ultimate crime gun.” In fact, the suppressor, like all suppressors doesn’t silence a gun but rather merely reduces the decibels, and in the case of the KelTec SUB 2000 CQB it brings it down by around twenty-five decibels. That might not sound like a lot—no pun intended—but it is the difference between hearing damage when ear protection isn’t available and safely shooting.

The other advantage that the integrally suppressed barrel provides is accuracy. The firearm has very little muzzle rise, but it is a little heavier as a result.

No doubt there will be some gun-grabbers who won’t like the fact that coupled with the suppressor this particular model can be folded in half for easy storage and transport and folded it is a compact sixteen inches. However, it must be noted again that even when this firearm is released in September it won’t likely be making (less) noise at the firing line any time soon. It will require a background check to be conducted by the National Firearms Act branch of the Bureau of Alcohol, Tobacco, and Firearms rather than the FBI’s National Instant Criminal Background Check System. That will require fingerprints, passport photos and $200 to pay for the transfer stamp.

Given that the NFA office in Martinsburg, West Virginia, was shut down due to the novel coronavirus pandemic, those kind folks working there are likely backlogged so it could be next summer at the earliest before this KelTec firearm gets any real attention at the range.