Kratos’s New Tactical UAV Is Not Your Average Drone 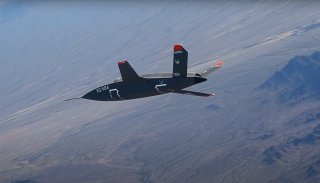 Kratos, the company behind some interesting and advanced tactical unmanned aerial vehicles (UAV), has publicly revealed their newest project the Off-Board Sensing Station (OBSS). Unfortunately, details about the latest UAV are scant, but here is what we know.

Breaking Defense broke the Off-Board Sensing Station story in an interview with Steve Fendley, the president of Kratos’ Unmanned Systems Division. During the discussion, Fendley explained the expectations of attritable aircraft like the OBSS.

“With expendable aircraft, the DoD assumes every launch is a one-way trip and that asset is not coming back. For attritables—I’ll give you very rough numbers here—let’s say we launched 10 aircraft; we hope to get all 10 back.”

“But if we get 7 out of the 10 back and our mission was successful, the Pentagon is still thrilled because the cost of the losses were minimal, and with the mission objective being successful and the cost being within the threshold, it’s a success. The idea is to have a similar combat or mission effect at a much lower cost and a lower risk than it would be for more conventional or legacy systems.”

Low on Cost but Not on Capabilities

Still, despite attritable aircraft’s expendable nature, tactical UAVs are not simply low-cost, low-capability aircraft. On the contrary, they can range into the tens of millions of dollars depending on capabilities.

“Attritable aircraft provide a mass advantage in conflict, which is commonly assessed as the current need to be able to meet near-peer adversary threats,” Fendley explained. “They solve the mass equation because we can afford to acquire and deploy large numbers of attritables.”

“The DoD has identified two cost ranges for attritables: $2 million to $20 million per copy and $2 million to $10 million per copy. Kratos’ family of attritable aircraft—the XQ-58A Valkyrie, the UTAP-22 Mako, the Air Wolf, several classified systems, and now, our proposed solution to OBSS—fit at the very low-cost end of those ranges and provide a high-performance-versus-cost-system solution that the user can afford to potentially lose at some non-zero rate.”

Outwardly, the OBSS airframe features a wide v-tail and prominent chine along the length of the fuselage. In addition, an engine intake sits atop the UAV’s fuselage—a design that would shield the platform’s engine from prying radar.

More precise details are not known. However, Steve Fendley did explain that Kratos’ “sweet spot is something that’s in the high-subsonic speed range, high-maneuverability G range, and high survivability with respect to a contested environment. We have absolutely become experts at developing and producing high-performance subsonic, affordable, jet, unmanned aircraft that include a range of autonomy capability.”

Kratos will undoubtedly reveal details about the Off-Board Sensing Station in the future. For the time being, however, it appears Kratos would like to build an affordable and at least somewhat stealthy data collection and observation station to network with manned fighters.