Lab in Wuhan Warned in Early 2019 about Bat-Transmitted Coronaviruses 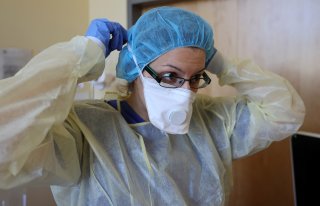 Should we have seen coronavirus coming? Many people, from various scientists to philanthropists like Bill Gates, have been saying for years that a global pandemic is inevitable, with others making more exact predictions about a specific type of virus that could strike the human race.

It turns out, there was a study released in early 2019, warning specifically about bat-based coronaviruses originating from China. And the paper itself originated from the Wuhan Institute of Virology-in the same region of China where the novel coronavirus is widely believed to have originated, likely by the same method the scientists predicted.

The study is called "Bat Coronaviruses in China," and it originated from the CAS Key Laboratory of Special Pathogens and Biosafety at the Wuhan Institute of Virology. Published in March of 2019, the peer-reviewed study argues that following Severe Acute Respiratory Syndrome (SARS), Middle East Respiratory Syndrome (MERS), and Swine Acute Diarrhea Syndrome (SADS), future pandemics may have similar origins, as all three originated in bats and two of them started in China.

The authors of the study are Yi Fan, Kai Zhao, Zheng-Li Shi and Peng Zhou, and while many other studies in recent years had predicted the likelihood of a pandemic, this one was unique in that it found a connection of diseases between bats and humans. Also, the scientists concluded that diseases from bats could spread easily among humans, even after other diseases did not.

"It is highly likely that future SARS-or MERS-like coronavirus outbreaks will originate from bats, and there is an increased probability that this will occur in China," the study's abstract says. "Therefore, the investigation of bat coronaviruses becomes an urgent issue for the detection of early warning signs, which in turn minimizes the impact of such future outbreaks in China."

It's important to make clear what this study is and what it's not. It appears to be an example of scientists being exactly right about what would happen in the future.

But it's not is any type of proof of a conspiracy theory. Contrary to what various social media reactions to the study have interpreted, the study does not show or come close to showing that China accidentally (or intentionally) created or released the virus, nor does it establish that the Wuhan scientists had a sample of what would become COVID-19 in their lab.

There have been earlier reports about possibly contaminated samples escaping from research labs in or near Wuhan, but such reports are both far-from-proven conjecture and have nothing to do with the "Bat Coronaviruses in China" study. Others have read nefarious motives into job postings posted by the institute last December “asking for scientists to come to research the relationship between the coronavirus and bats," but clearly the scientists were upfront about studying that connection beforehand.

There's also no indication that the Chinese government did anything to suppress or censor the study; for all of China's notoriety about Internet censorship and other coverups specifically related to COVID-19, the study remains online and free for anyone to read.

China, undoubtedly, did many things wrong when it came to the spread of COVID-19. That they failed to adequately heed the advice of scientists who happened to be located right near where the pandemic ultimately originated, can be added to that list. But at the same time, it's important not to see things in the study that aren't there.