Laboratory of War: The Army Is Turning Prototypes Into Lethal Weapons 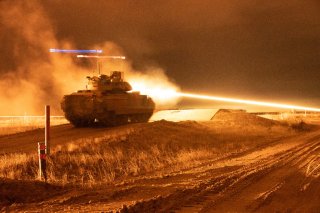 Lasers, hypersonics, robots, and precision weaponry are all fast becoming key elements of the U.S. Army’s operational arsenal. Each of these paradigm-changing weapons systems first emerged from the science and technology element of the service.

The Army is making a push to better cooperate with the science and technology community for rapid acquisition to fast-track the development of promising new technologies for operational use.

While there has always been a synergy between research, scientific inquiry, innovation, and military operations, the Army is now making new efforts to respond to the rapid pace of change by linking breakthrough or disruptive technologies more closely with the current needs of warfighters.

“The way that it was looked at in the past, and I think the way that many people still think of it is that there is science, technology, then there’s a valley of death. Then there’s the engineering and production piece, that skips the entire process of going from a demonstration, which is really what science and technology is, and we move into an actual first article that allows us the ability to employ and learn at a small scale,” Lt. Gen. Thomas Todd, Chief Innovation Officer, Army Futures Command, told The National Interest in an interview.

Successful execution of this strategy relies on what Todd referred to as rapid prototyping which involves engineering functional applications of a promising technology with the hope of making a rapid transition to production and operational deployment.

Referring to hypersonic capabilities, lasers, and precision weaponry, Todd told The National Interest that “in the context of a modernization continuum, those systems were demonstrated and then prototyped in a rapid fashion. That helped us to not only employ it operationally early but also to be able to evaluate it from an operational context and see how the division commander would use those. This idea of going from experimentation straight to scaling to a large scale is just not realistic. As a matter of fact, it doesn’t survive.”

Early prototypes of new technology and weapons which have shown promise in testing can then be evaluated in an operational context to help refine and establish requirements. This approach offers a clear and impactful way for Army weapons developers to expedite the development and delivery of new technologies.