Las Vegas Is Closed Thanks to the Coronavirus 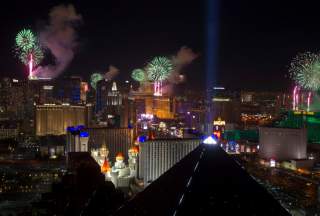 As focus on the coronavirus pandemic remains mainly on the East Coast and West Coast, more people in major cities further inland are being infected by the deadly virus. Now, Las Vegas, Nevada, is considering closing its world-famous strip, with employees at multiple hotels testing positive for the virus. The transitory nature of the people who visit Las Vegas and the fact that those visitors are the lifeblood of the dominant service industry there, make the city a dangerous example of how the pandemic can upset a local economic order.

The state of Nevada currently has twenty active cases of coronavirus, with sixteen of them located in Clark County (where Las Vegas is located). Nevada Gov. Steve Sisolak declared a state of emergency in Nevada on March 12.

Both cases of coronavirus among hotel workers occurred in establishments owned and operated by MGM Resorts International. One worked at the Luxor Hotel & Casino while another worked at the pool at the MGM Grand. MGM Resorts International has announced that it will be closing several of its locations, including hotels in New York, Massachusetts, Ohio, and all thirteen properties in Las Vegas. It is expected to begin implementing layoff rounds next week.

Caesars Entertainment has suspended all of its shows until the end of March. It has also begun laying off employees—firing entire departments.

Not every Las Vegas hotel is going in this direction, however. The Wynn Las Vegas will remain open but is closing off many of the amenities that could pose a health risk. These include the buffet, sportsbooks, the poker room, clubs, spas, salons, and fitness centers. It will only operate as a hotel, serving the needs of the few customers who still wish to travel. Meanwhile, two other Wynn owned properties on the strip will be closed for two weeks, after which the situation will be reassessed.

“What we’re going to do through these challenging times is make sure that all of our full-time employees—whether you’re in a closed outlet or you’re working here—will be getting their pay,” announced Wynn CEO Matt Maddox, assuring employees and the public that layoffs would not be taking place. “We don’t know where this is going to end, but we do know that it will.”

The Las Vegas Sands announced that it currently has no plans to close its doors. “Our property remains open and we will continue taking the recommended precautions necessary to keep our team members and guests safe,” the hotel announced in a statement. “We will also be working with our team members impacted by the school closings in our community.” On March 15, Sisolak announced that all public schools in Clark County be closed.

Sisolak has said that because “gaming is the lifeblood of Nevada’s economy,” that he would “strongly support any decision” that gambling properties make to remain open or closed.