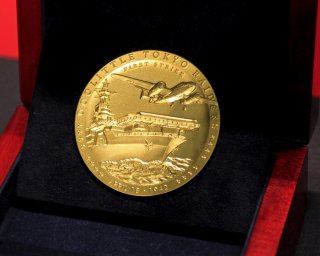 On April 18, 1942, Lt. Col Richard Eugene Cole served as co-pilot to Lt. Col. Jimmy Doolittle in the lead airplane of sixteen B-25 Mitchell bombers that took off from the flight deck of the USS Hornet (CV-8) to take part in the "Doolittle Raid" on Tokyo. It was the first time that bombers took off from an aircraft carrier on a bombing mission.

Cole, who remained in China after the raid until 1943 and later served in the China-Burma-India Theater during the latter part of World War II, retired from the United States Air Force in 1966. He became the last surviving member of the original eighty Doolittle Raiders in 2016.

Earlier this month at Joint Base San Antonio-Fort Sam Houston, Texas, Cole was honored and posthumously promoted to the rank of colonel. Family members and distinguished guests, including Air Force Chief of Staff Gen. Charles Q. Brown, Jr., gathered to pay their respects for Cole, who died at the age of 103 on April 9, 2019.

He was remembered as a man who faithfully served his country, as well as a devoted father and a man of faith, who truly embodied the idea of service before self, and who volunteered for many dangerous missions during his twenty-six-year military career. Brown presented a certificate of Cole's posthumous promotion to colonel to Cole's children, retired Air Force Lt. Col. (Dr.) Rich Cole and Cindy Cole Chal.

"I would say Dick Cole lived a life and had a career that many of us would say was full of danger, but he was up to the task," Brown said. "He is truly a member of our Greatest Generation. And I'm proud to say this heritage of volunteering to do what is right and answer the nation’s call lives with our Airmen today."

The memorial service and posthumous promotion for Cole and the interment of his remains occurred on what would have been his 106th birthday.

Beyond the Doolittle Raid

In addition to serving as Doolittle's co-pilot, Cole also undertook a number of dangerous missions, including flying C-47s over "The Hump"—the difficult air passage through the Himalayan Mountains—to deliver supplies to China in their fight against the Japanese.

In 1944, Cole then flew with the 1st Air Commando Group, which provided support to ground units fighting in the jungles of Burma. Cole flew a variety of missions including fighter cover, airdrops, and even the landing of troops, food, and equipment. He also helped with the evacuation of casualties.

Rich Cole also described his father as a faithful husband to his of nearly sixty years.

"I struggle with how you really put into words 180 years of collective life and 60 years of marriage," said Rich Cole at the September 7 ceremony." But if I had to say one thing about Mom and Dad, it would be that they fought their entire lives for their family, their faith, and their friends and their flag."

Retired Chaplain (Maj. Gen.) Charles Baldwin, a friend of the Cole family for more than thirty years, added that Cole will now rest in peace with his beloved wife, Martha, and the rest of the Doolittle Raiders.

"After 103 years of serving his country, raising a beautiful family and honoring all of those who have served in the armed forces, Dick Cole went home to be with his beloved wife, and a group of (Doolittle) Raiders and is settled down in the Father's house," Baldwin said. "It's a promise from God. Mission complete, Col. Cole; at ease for eternity. Amen."