Last Year, Israel Lost an F-16I Fighter Because the Crew 'Failed to Defend Themselves' 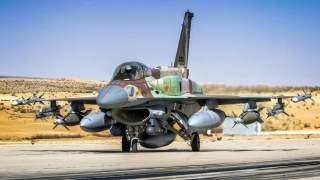 The Israeli Air Force (IAF) has completed its investigations on the loss of a F-16I to a Syrian S-200 (NATO: SA-5 Gammon) missile on Feb. 5.

The service determined that the crew, in its quest to complete the mission, had failed to defend themselves from the incoming missile. Seven other aircraft were able to complete their missions by deploying countermeasures.

“Their actions did not correlate with standard procedure while under enemy fire.”

As we have previously explained the incident came after an Israeli AH-64 Apache combat helicopter successfully intercepted an Iranian unmanned aerial vehicle (UAV) launched from Syria that infiltrated the country’s airspace early Saturday, the Israeli Defense Forces (IDF) said in a statement.

IAF F-16Is were scrambled to attack 12 Syrian and Iranian targets in Syria in retaliation. On their way back to base, the Israeli combat planes came under Syrian anti-aircraft fire, with one missile exploding near one of the aircraft and bringing it down.

According to Ynetnews the pilot and navigator were able to bail out of the plane before it crashed near Kibbutz Harduf. The pilot was seriously injured, while the navigator was only lightly hurt. Both have since been discharged from the hospital.

The investigation into the incident, which was presented to Israeli Defense Forces (IDF)Chief of Staff Gadi Eisenkot, determined that the advanced planning for the operation was done properly, and the intelligence for the mission was sufficient, leading to the successful destruction of the targets, which were marked prior to the retaliatory strike.

In total, the Syrian aerial defense apparatus launched 27 surface-to-air missiles (SAMs) at IAF planes throughout the night and early morning as events unfolded, 13 of them were fired while Israeli jets were attacking the Iranian drone’s control and command center. One of the missiles, a large long-range outdated SA-5 missile, hit the Israeli F-16.

The warning systems in the F-16I that was hit alerted the pilot and navigator of the threat on time.

Despite this, the crew of the downed F-16I failed to deploy countermeasures.

The pilot and navigator failed to take heed of the SA-5 missile, which locked onto their plane. The IAF determined that to be a “professional error.”

The crew should have defended themselves as a priority over completing the offensive mission, a senior IAF officer said.

“The mission was completed successful and still, the plane should not have been downed, that is the standard we expect and we train for this,” he concluded.

Gabriele Barison is an aviation, defense and military writer. He is the Co-Founder and Editor of “The Aviation Geek Club” one of the world’s most-read military aviation blogs. He has flown Super Puma and Cougar helicopters with the Swiss Air Force.