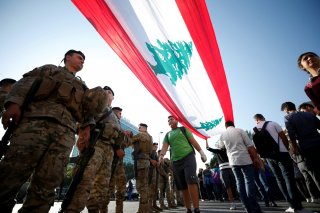 Lebanon’s situation is dire. Queues of cars waiting to fill up a few gallons of gasoline stretch for hundreds of meters. The depth of the crisis becomes clear when we remember that Lebanon does not have a public transportation system. Although there are no rail or metro networks, there are employees in the railways and public transportation services. It does not stop at the borders of a severe transport crisis. Medicines have become a scarce commodity in the country. WhatsApp groups transmit daily requests to secure essential medication for patients. Lebanese expatriate networks seek to provide what can be provided. Store shelves are emptied of basic foodstuffs. Infant formula is not available. The list continues.

The World Bank painted a gloomy picture. In its Spring 2021 Economic Monitor, the organization ranked Lebanon’s financial and economic crisis in “the top 10, possibly top three, most severe crisis episodes globally since the mid-nineteenth century.”

Lebanon has finally received the attention of Western media, especially after the disastrous August 4, 2020, blast in Beirut port. The detonation of 550 tons of ammonium nitrate—the original shipment that arrived in 2014 was more than 2,700 tons; some experts believe that a significant portion of this shipment was smuggled out of the harbor and used by the Syrian regime to produce barrel bombs—killed more than 200 people and left 300,000 homeless.

Lebanese do not trust either the politicians or the judiciary system and for good reasons. The prime example is the U.N. Human Rights Council (UNHRC) request for an international, independent, and impartial investigative mission to investigate the August 4, 2020, blast in Beirut port -and the local investigation is facing political obstacles. The international aid after the August 4, 2020 explosion was “lost” in the corruption rings. A Thomson Reuters Foundation investigation found that at “least $250 million in U.N. humanitarian aid intended for refugees and poor communities in Lebanon has been lost to banks selling the local currency at highly unfavorable rates.”

What could be done?

The disastrous situation calls for urgent humanitarian intervention. France led an international video conference that raised $370 million on the anniversary of the Beirut port blast, without clearing how the aid will be disseminated. A similar effort has been undertaken by world powers, who promised in June 2021 to “support Lebanon’s army to prevent its collapse.” Lebanese Army Chief Joseph Aoun desperately told an international meeting, which France organized last June, that Lebanon might face dire consequences if the country’s crisis persisted and military salaries continued to tumble. “How can a soldier support a family with a salary that does not exceed $90?” he said. Bilal Saab, a senior fellow and the director of the Defense and Security Program at the Middle East Institute, wrote in Foreign Policy that the Lebanese army “is a viable U.S. partner because it’s the only remaining institution that is representative of all Lebanese religious communities and able to function despite the national economic meltdown.” Although Saab admits that the United States should not “give the Lebanese army a blank check or not care about returns on its investment,” he argues that the Lebanese Armed Forces (LAF) is the best option to support because of other alternatives, like civil society, are weak. But this argument is not adequately supported.

This rhetoric overlooks the fact that the LAF is mired in corruption and abuses the human rights of the Lebanese and Syrian refugees in Lebanon. A prime example is that the military court is still trying civilians, although many military officers do not even hold a law degree. The LAF, which received U.S. financial aid amounting to $2 billion since 2007, needs financial assistance to survive. Still, the LAF should not be responsible for channeling international humanitarian aid to civilians, since its delivery of humanitarian assistance could boost its domestic image, leading it to become another version of the military dictatorships that rule the region. The LAF is not immune to nepotism and clientelism. In 2017, LAF investigated a scandal that a $100k bribe is needed to pass the entry test to the military college.

On Sunday, August 15, twenty-eight people were killed and more than seventy-five injured in a fuel tank explosion in Akkar, northern Lebanon. According to Reuters, “The army had seized a fuel storage tank hidden by black marketeers and was handing out gasoline to residents when the explosion occurred.” The LAF Twitter account published several pictures and videos of soldiers giving out the gasoline from black marketeers’ depositories for free. Still, the army didn’t announce the names of the smugglers or bring charges against them. The way the army is handling this issue is closer to populist behavior rather than that of law enforcement.

Yet some Lebanese politicians are pleading with the LAF’s leadership to take over the political process and lead the country. Among those is the deputy speaker of the parliament, Elie Ferzli. He asked the army to take power in Lebanon and suspend the constitution. It’s important to note that the LAF’s leadership has always been ambitious, and since 1998 three presidents in Lebanon came from the army. Two of them, Emile Lahoud (1998–2007) and Michel Soleiman (2008–2014), were elected while they were the commander of the army, and Soleiman’s successor, Michel Aoun, was the commander in the 1980s

Instead of looking to the LAF, the most effective option is to create an alliance between the United Nations Interim Force in Lebanon (UNIFIL) and Lebanese civil society organizations. Such an approach offers an interim solution for the crisis to control international aid and prevent a humanitarian catastrophe in Lebanon. After the August 4 explosion, UNIFIL deployed a multinational force to Beirut to “assist Lebanese authorities with their efforts to deal with the aftermath of the tragic 4 August explosions.” This deployment could be an example of how UNIFIL can assist with the distribution of humanitarian aid.

On the one hand, UNIFIL has been active in Lebanon since 1978 and has more than 11,000 military and civilian workforces from forty-six countries, with around 450 daily operational activities, seventeen hospitals, five military ships, and a $480 million budget. On the other hand, Lebanon’s civil society is “diverse and able to respond to the needs of various constituencies, ranging from the provision of humanitarian aid to advocacy,” according to the 2019 Civil Society Sustainability Index. There are between 8,500 and 14,000 civil society organizations (CSOs) working in Lebanon in 2019. The 2006 Israeli war with Lebanon and the Syrian refugee crisis empowered the Lebanese CSOs. UNIFIL can use its infrastructure to provide logistical assistance to humanitarian aid—food and health assistance rather than cash assistance—while Lebanese and international organizations working in Lebanon can assume the responsibility of disseminating the aid to the neediest Lebanese and refugees living in Lebanon.

In parallel to this aid alliance, there is a need to run several workshops among the Lebanese activists to help build the opposition’s trust and a political program and movements that lead to a long-term solution. The October 2019 protests created an open space where young people discovered their peers from different regions, political affiliations, and religious backgrounds after years of disconnection because of political and social divisions. However, this experiment was cut short due to the violent response from the Lebanese authorities and the pandemic. In the mid-1990s, the “Intezarat Shabab” conference (the literal translation is: Youth Expectations Conference) was an important initiative that brought the younger generation together after fifteen years of civil war. Such efforts should be repeated to build on the 2019 protests to overcome the lack of trust and organization among civil society and political activists that is so common in many Arab countries. As long as oppression reins, civil society and political parties will remain weak, and it will not be easy to overcome such systemic distrust.

Lebanon is in free-fall. All possible scenarios are dire. Very soon, thousands of Lebanese citizens and refugees alike will illegally smuggle themselves to Europe. The international community should act now to prevent starvation and prevent another generation from being lost to state failure.

Thaer Ghandour is a Lebanese journalist with experience writing on the Middle East-North Africa region’s politics. He holds a Master of International Public Policy from Johns Hopkins School of Advanced International Studies (SAIS). Follow him @thaerghandour