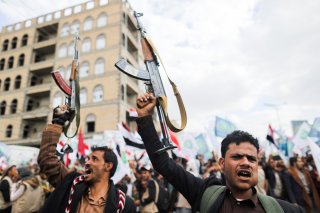 Four Gulf states recalled their diplomats from Beirut in late October, pushing Lebanon further into isolation. Kuwait, the United Arab Emirates (UAE), and Bahrain joined Saudi Arabia in this official diplomatic action after Lebanese information minister George Kordahi publicly criticized Riyadh’s role in the Yemen conflict. In the eyes of the Gulf states, Kordahi’s comments, which paint the Iranian-linked Houthis in a positive light, showcase Iran’s expanding foothold in Lebanon’s polity. The Gulf states’ unified reaction to Hezbollah’s perceived dominance in Beirut underscores the depth of the Saudi-Iranian rivalry while also adding another blow to the already unstable country.

On October 28, audiotapes containing remarks made by Kordahi prior to his time in office began to widely circulate. Kordahi can be heard supporting the Houthis’ actions as “defending themselves… against an external aggressor that has invaded their country.” The Houthis, once designated a terrorist organization under the Trump administration, have been denounced repeatedly by current Biden White House officials for carrying out terror attacks targeting civilian areas in the region. Iranian links to the Houthi rebels are extensive, as Tehran’s regime seeks to fill power vacuums across the Middle East with allied Shia Muslims.

Following the release of audio where Kordahi slammed Riyadh, Saudi officials gave Lebanon’s ambassador two days to leave the country. Kuwait and Bahrain immediately followed suit and the UAE also called on its citizens to leave the country. The Gulf states’ unified response stems from the signing of the January 2021 Al-Ula Declaration. This agreement concluded the forty-first summit of the Gulf Cooperation Council (GCC), bringing together Saudi Arabia, Bahrain, Kuwait, Egypt, and Qatar in the name of regional stability in the shadow of Iran’s growing malign activity in the region.

Just a few weeks prior to the Beirut conflict, Riyadh confirmed it held the first round of talks with Iran’s new government in an effort to deescalate tensions between Tehran and its Sunni-dominated neighbors. Although significant progress was never expected from the initial talks, Riyadh’s decision to remove its diplomats in Beirut essentially cements that the Saudi-Iranian rivalry is stagnant at best.

While Riyadh and Tehran duke it out in Beirut, the people of Lebanon will endure the consequences. In addition to recalling its diplomats from Beirut, Saudi officials banned imports from Lebanon. Beirut is currently experiencing one of the worst economic disasters in modern times, and the import ban will cause the country to lose out on roughly $250 million. Despite these ramifications, Riyadh cut imports from Lebanon because of Iran’s menacing behavior in the country and Hezbollah’s “continuing dominance of the political scene.”

Hezbollah, the Iranian-directed terror group, is Lebanon’s most powerful faction. The faction labels itself as the country’s “Islamic Resistance Force,” and vows to counter Israeli aggression by dominating all aspects of Lebanon’s society. In addition to its military operations, Hezbollah is deeply entrenched in Beirut’s political and economic spheres. Hezbollah members have held cabinet positions in the Lebanese parliament since 2005, and it has been estimated that the group seizes nearly $500 million annually from Lebanon’s economy.

Iran’s exploitation of Lebanon’s dire situation is isolating the country from the foreign aid it needs most. Kordahi’s defense of the Houthis, Riyadh’s sworn enemy, was merely the straw that broke the camel’s back. Unless the new Lebanese government can gain distance from Hezbollah’s control, the Gulf may fail to be the saving grace the country so desperately needs.

Maya Carlin is an analyst at the Center for Security Policy in Washington D.C. and a former Anna Sobol Levy Fellow at IDC Herzliya.