The Legacy of John McCain 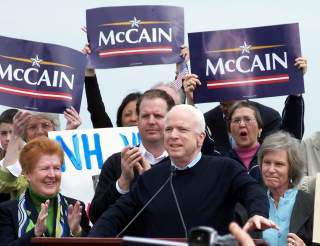 A lot will be said in the coming days about Sen. John McCain and his place among a pantheon of American heroes.

It will all be very well-deserved. McCain, who was the son and grandson of admirals, was indeed a hero. The Arizona Republican’s service in Vietnam was testament to that, as was his career in the House and Senate.

McCain, who succumbed to cancer Saturday at age 81 at his ranch near Sedona, Arizona, was committed to principle.

Many of those principles were bedrock conservative ideas—faith in free markets and trade, strong national defense, defense of liberty around the world.

Others are less appreciated and increasingly rare. McCain was the sort of leader who sought to bring the nation together, not divide it. He believed fiercely in bipartisanship, not in sacrifice to principle, but in furtherance of it.

He also believed in fighting hard, but patching it up once the fight was over.

Especially in the internet age, mourning and tribute are fleeting. Even more so for a senator, whose one vote counts just as much as those of his colleagues.

Even before the praise fades, Washington will begin speculating on what the loss of that one, impersonal vote means, and who may succeed him in casting it.

What will never fade is the impact that McCain had on the people with whom he came into contact. I had the honor to work for him for six years. And there was never a day then or since that I was not proud of that fact.

He instilled in me a sense of decency in pursuit of principle that I am, in turn, passing on to my children.

I loved John McCain. I will miss him, but his family will miss him more. I hope they can console themselves just a little with the knowledge that his legacy endures.