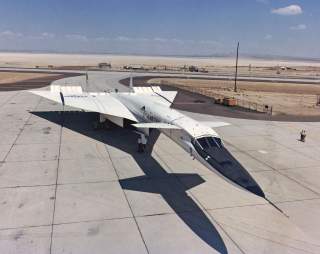 The futuristic XB-70A Valkyrie was originally conceived in the 1950s as a high-altitude, nuclear strike bomber that could fly at Mach 3 (three times the speed of sound) – any potential enemy would have been unable to defend against such a bomber.

As a result, in 1961, the expensive B-70 bomber program was canceled before any Valkyries had been completed or flown.

Designed by North American Aviation (later North American Rockwell and still later, a division of Boeing) the XB-70 had a long fuselage with a canard (or horizontal stabilizer) mounted just behind the crew compartment. It had a sharply swept 65.6-percent delta wing. The outer portion of the wing could be folded down in flight to provide greater lateral-directional stability. The airplane had two windshields. A moveable outer windshield was raised for high-speed flight to reduce drag and lowered for greater visibility during takeoff and landing. The forward fuselage was constructed of riveted titanium frames and skin. The remainder of the airplane was constructed almost entirely of stainless steel. The skin was a brazed stainless-steel honeycomb material. Six General Electric YJ93-3 turbojet engines, each in the 30,000-pound-thrust class, powered the XB-70. Internal geometry of the inlets was controllable to maintain the most efficient airflow to the engines.

The XB-70 was the world’s largest experimental aircraft: capable of flying at Mach 3 at altitudes of 70,000 feet, it was used to collect in-flight information for use in the design of future supersonic aircraft, military and civilian.

The major objectives of the XB-70 flight research program were to study the airplane’s stability and handling characteristics, to evaluate its response to atmospheric turbulence, and to determine the aerodynamic and propulsion performance. In addition there were secondary objectives to measure the noise and friction associated with airflow over the airplane and to determine the levels and extent of the engine noise during takeoff, landing, and ground operations.

Typically the aircraft was escorted by a TB-58 chase plane during research flights. This because the TB-58 (a prototype B-58 modified as a trainer) had a dash speed of Mach 2, which allowed it to stay close to the XB-70 as it conducted its research maneuvers. When the XB-70 was flying at or near Mach 3, the slower TB-58 could often keep up with it by flying lower and cutting inside the turns in the XB-70’s flight path when these occurred.

Program management of the NASA-USAF research effort was assigned to NASA in March 1967.

Noteworthy, while the number two XB-70 was destroyed in an accidental mid-air collision on June 8, 1966, the first Valkyrie continued to fly and generate valuable test data in the research program until its final flight which took place on on Feb. 4, 1969.