Legend: Why the X-1 Program Deserves a Special Place in Aviation History 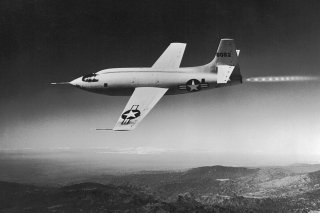 Image: The #46-062 Bell X-1 rocket-powered experimental aircraft (known for becoming the first piloted aircraft to fly faster than Mach 1, or the speed of sound, on October 14, 1947) photographed during a test flight. NASA.