The Legendary A-10 Warthog is Nothing Without Its Cannon 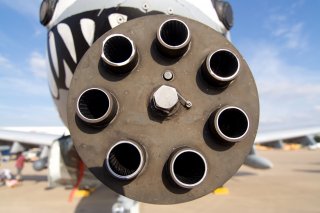 One of the most iconic weapons of its time, the A-10 Warthog’s legendary GAU-8 Avenger cannon remains a force to be reckoned with.

The A-10 Thunderbolt II, affectionately called the “Warthog” by its pilots, was introduced in 1977 and continues to serve as the U.S. Air Force’s staple close air support (CAS) fighter. The Warthog is among the toughest aircraft in the world, designed with numerous redundancies and fail-safes to keep it flying even in the face of catastrophic damage. But despite its impressive survivability and host of other forward-looking features, it’s no secret that the A-10 is really built around its cannon. Conceived in the early 1970s, the Avenger was designed in tandem with the A-10. Besides the cannon, the government contract called for the development of four ammunition types: high explosive incendiary (HEI), armor-piercing incendiary (API), semi-armor-piercing high-explosive (SAPHE), and training rounds.

The complete Avenger system comprises as much as sixteen percent of the Warthog’s unloaded weight, and figures so prominently into the A-10’s balance that the aircraft would tip over without it. The nose landing gear is slightly offset to ensure the proper alignment of the firing barrel. The gun itself is mounted off-center, with the firing barrel positioned deliberately to control for a recoil force so strong that it can potentially cause the A-10 to veer off target.

Mounting a gun this powerful on a jet aircraft is nothing short of a herculean task, but the result speaks for itself. The 30mm, seven-barrel rotary cannon can fire 3,900 rounds per minute, with a lightning-fast windup time and impressive eighty percent accuracy at an operational range of about four thousand feet. “It’s a highly accurate point-and-shoot weapon that grants our pilots superior firepower and flexibility in a close-combat ground fight,” former A-10 pilot Lt. Col. Bryan T. France told The Aviationist. This combination of accuracy, rapid fire, and sheer stopping power places the Avenger a cut—or, as it were, a shot—above similarly designed weapons. A 3D animation, published earlier this year by the YouTube channel “3D Mil-Tech,” offers a stunningly detailed and well-rendered look into the cannon’s inner workings, laying bare just how much engineering genius went into its design. There are several videos of the Avenger in action. One of them shows an A-10 shredding a Taliban light vehicle, replete with the loud, distinctive sound made by the cannon. The cannon can likewise immobilize main battle tanks from as far as 6,500 meters with its armor-piercing rounds, earning it the well-deserved moniker “flying tank.”

American Warthogs destroyed more than nine hundred Iraqi tanks—as well roughly two thousand other military vehicles and twelve hundred artillery pieces—over the course of Operation Desert Storm in 1991, though it is difficult to determine exactly how many of those kills were scored by the Avenger cannon as opposed to the plane’s onboard complement of missiles, bombs, and rockets.

The Avenger is most commonly associated with the A-10—and rightly so, given its origins. But the cannon has a larger, global legacy: it is the basis of Goalkeeper, a Dutch close-in weapon system (CIWS) that currently serves in as many as seven different navies. Goalkeeper is particularly well-represented in South Korea, where it can be found aboard all three of the country’s active destroyer classes in addition to the Dokdo-class of amphibious assault ships.