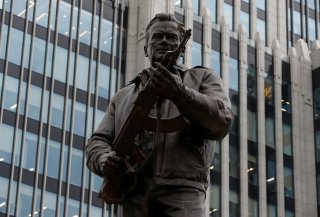 Russian cinema is as old as Hollywood, and the first Russian fictional film, Stenka Razine, dates back to 1908. By 1913, Russia had some 1,400 cinemas and had produced around a hundred films. During the Russian Civil War in 1919, the Communists nationalized the film industry, and also created the world’s first film school. Film became the “most important of all arts” for the Bolshevik regime.

Among the most important film of the early Soviet era was Sergei Eisenstein’s The Battleship Potemkin, which depicted a highly fictionalized account of the 1905 Revolution. However, it also was innovative in its use of cinematic techniques, which were later adopted by Western filmmakers.

The Soviets produced many historic epics, with Eisenstein’s Aleksandr Nevsky (1938) and Ivan the Terrible (1944) being among the most notable. Even into the later years of the Cold War, the Soviet Union continued to make epics that chronicled the struggle during the Great Patriotic War—the Second World War as we know it.

While there was a lapse in these lavish epics after the collapse of the Soviet Union, in recent years the Russian film industry has returned to its former glory with films that again chronicle the exploits of the Red Army during the war.

Among the most recent is the 2020 film Kalashnikov, about Mikhail Kalashnikov’s efforts to develop a new class of firearms for the average Soviet foot soldier. The film, which is now available in the United States on DVD and Blu-ray with a dubbed audio track (a region-free Russian version is also available online with the original Russian audio and English subtitles), tells how the uneducated, self-taught tinkerer successfully went on to create the most infamous infantry weapon of the twentieth century, the AK-47.

The film, which begins with Kalashnikov as a tank driver who is wounded at the Battle of Bryansk, isn’t really a traditional biography of the man. While it does focus on his efforts to develop a better firearm, the story is limited essentially to his desire to improve upon the PPSh-41, a weapon already considered one of the best submachine guns of the era. It includes his time working at the Central Scientific-developmental Firing Range for Rifle Firearms of the Chief Artillery Directorate of the Red Army, leading to the development of the assault rifle.

As film biographies go, this one very much keeps to those key years. His later life, including the efforts to develop subsequent weapons for the Soviet Union, is not included, nor is the fact that he was largely unknown for decades. Instead, it is a propaganda film that is meant to reinforce the myth of Kalashnikov. It doesn’t really answer the questions of how an uneducated peasant was able to even understand the technical manuals, or how the Communist officials simply allowed him to work on his own. But today, Kalashnikov the man has become almost as mythic as the weapon he eventually created.

The film will not rival The Battleship Potemkin by any means in terms of cinematography, but that isn’t the point. This is simply a way for Russian president Vladimir Putin’s Russia to tell the story of a man who is already legendary. Of course, it is notable too, because unless the National Rifle Association were to fund it, we can expect that a film on Eugene Stoner, the maker of the AR-15, will likely never be made.

A full review of the film can be read on The Mag Life’s “Saturday Night at the Movies.”