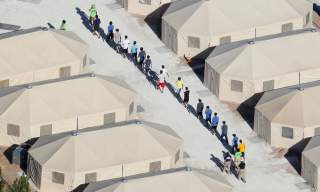 The controversy over how the U.S. government will, should, or should not deal with the large number of detained immigrant children now in its keeping, will soon confront yet another sticky issue. Children means schools—and setting up schools for detainee children means making a host of complicated decisions and arrangements.

As it happens, we were involved in a somewhat analogous situation in Iraq in 2007 when the U.S. military found itself abruptly in charge of large numbers of detained youths. In an unplanned-for consequence of the surge, hundreds of Iraqis spanning from the age of eleven to seventeen were detained for activities ranging from placing IEDs to being on the wrong street corner during a raid. What to do with nine hundred captured adolescents? School was the obvious answer—but it was not an enterprise that fell into the natural competency of the military in the middle of an insurgency. The Department of Defense brought in the RAND Corporation to advise and assist with launching this unprecedented school. No military doctrine existed to devise a school for Iraqi teenagers just as none exists now when the potential detainees include even younger children who require education as per federal law. In Iraq, decisions made at breakneck speed, from planning the facilities to creating a curriculum, were rife with pitfalls and unintended consequences just as they likely will be in the current situation.

Obviously, there are important differences between these two populations. There are no hostilities between our country and their respective countries of origin, and these are not terrorists or suspected terrorists. But both groups are deprived of their liberty for an indefinite period of time, and their captors are going to be in charge of educating them.

In the case of the immigrants, strong arguments have been made against detention. Even the October 2016 ICE Advisory Committee on Family Residential Centers Report essentially warned, “Don’t do it,” on the grounds that such a measure would likely be expensive and administratively tangled. But if the plan goes forward, as now appears likely, it’s obviously in everyone’s best interest for things to go as well as they possibly can. In that spirit we offer six recommendations, drawn from our earlier experience with detainee schooling.

1. Integrate the planning among agencies and stakeholders to the maximum extent possible. Migrant detention centers will involve multiple agencies and presumably outside contractors in addition to the Department of Defense, Department of Justice, Health and Human Services, Education, Homeland Security, and a host of civil society and human-rights groups. Each agency will plan with different expertise, values, cultures, and routines. Joint action is almost inevitably difficult, but prioritizing integrated planning will be essential to success. In Iraq, the Army Corps of Engineers readied the school facility in an impressive thirteen days, but the military culture of “stay in your lane” minimized consultation between builders on the one hand and the military and civilian education planners on the other. The educational plan divided approximately seven hundred detainees eligible for school into classes of sixty students each—that being a typical class size in Iraq. On what would have been their first day of classes, the juveniles arrived in eleven new, expensive buses, only to be turned around almost immediately and sent back to their tents when it became clear that the small classrooms would not fit sixty adolescent bodies. On the next day only 250 detainees came to school, now split into eight classes of twenty-three to thirty students. But this meant that each detainee would attend school only one day out of three, instead of the initially foreseen six days a week. This subverted the entire point of the school—to provide a consistent, intensive educational experience and stave off boredom. A gap between intention and execution widened in one fell swoop.

In the case of the immigrants, major problems are already emerging, with the government struggling to reunite children with their families as ordered by the courts, because information on who goes where and who is related to whom, resting with different agencies or even having been destroyed.

Division of responsibilities is fine, but there must be continual communication among the implementers, and an overarching coordination body to make sure the pieces all fit and make sense.

2. Establish and communicate a clear process for what the detainees can expect. For the detention experience to be bearable, detainees need a degree of hope—or at least clarity—about their circumstances and their future. This requires careful record-keeping, explicit information on the bureaucratic and legal processes that affect them, and a supporting infrastructure to ensure that these processes can properly be followed. In the post–Abu-Ghraib years, the U.S. military intended their treatment of juveniles to nourish hope and make the young men feel positive about a new Iraq. Given the circumstances, promoting hope was hard: these young people missed their families and were anguished to be cut off from regular contact. They worried that their loved ones might be dead, injured, suffering, re-located, and impoverished without their income. The military allowed them to communicate with family but the logistics were difficult. A misdialed number or changed residence could cut them off indefinitely. The Judge Advocate General’s Corps entitled detainees to six-month case reviews, which potentially could lead to their release. The detainees lived for this, but an incompetent or indifferent translator could destroy their chances in a flash, making it impossible for them to properly state their case. We urge planners to devote sufficient resources to keeping children and families informed and providing whatever support systems are necessary to make the process fair.

3. Review programs continuously to ensure that they make sense. In Iraq someone at some point jumped to the conclusion that most of the detainees were illiterate. Piled on top of that came a second bold assumption, namely that once they learned to read, the detainees would study the Quran and realize that their religion forbade terrorism. No one took the trouble to ascertain either the educational level or the degree of religiosity of the detainees. Instead, the military went ahead and organized literacy classes at great expense for the 60 percent of adult detainees who were believed to need reading instruction. A bit of research would have revealed that Iraq actually had a fairly robust education system, and a short survey of the both juvenile and adult detainees would have yielded a formidable number of university graduates, high school graduates and those who at least a completed basic primary education. Educated Iraqis, herded into a classroom to learn their Aleph Beit, could only conclude that their American captors were clueless. Even the least educated adults could generally read the Qur’an on their own, and at both ends of the scale—the deeply pious, and the secular, detainees found themselves baffled and even insulted at being instructed in their own religion at the behest of these foreign “unbelievers.” Even when all of this became clear, it was deemed too late to backtrack from a well-publicized campaign to eradicate illiteracy and spread moderate Islam—and from the expensive contracts behind it.

By contrast, in the latter days of World War II efforts were made to identify the better-educated prisoners and mentor them into future leadership roles in post-war Germany. But in Iraq, an image of illiterate detainees—cited everywhere by military higher-ups and thus in visitors’ accounts in the press—stood in the way of seeing them as smart and capable, with significant prior education and skills on which to build. In the case of the juveniles, this belief in detainee illiteracy caused the policymakers to budget and plan for education only to the fifth grade. In the case of the current detained immigrants, it is imperative to plan education programs on the basis of factual knowledge. Where are they actually from? What kind of curriculum content will be most helpful to them?

4) Listen to the staff on the ground and give them some power to provide inputs to policy. Staff on the ground often see an ill-advised decision coming their way, but are powerless to contest it. In Iraq, military administrators often overlooked or ignored ground knowledge, for example when creating a Ramadan schedule. Iraqi teachers were hoping for the usual routines: mornings at school and time to rest in the afternoon. This works well during the fasting month, when there is a large meal just before dawn, people customarily do whatever work and errands are necessary while the day is still cooler and their energy level is up, then drift into a period of inactivity until dusk and the next meal. But the newly arrived officer charged with making the schedule, in an abundance of empathy and against the advice of others who knew better, imagined that the afternoon would drag on endlessly for hungry youths as they waited for sundown and food. He decided to hold afternoon classes to keep them occupied. From day one of Ramadan, that plan proved mistaken. School started at noon. By late afternoon, the classrooms exuded lethargy, with most of the detainees napping on their prayer rugs while unhappy disgruntled teachers offered half-hearted reprimands. Communication between those who plan at a distance and those who are close to the situation is essential for the good of all. And there has to be a mechanism to recognize when a mistake was made, and policy to be adjusted or reversed accordingly.