Let the Pain Begin: Here’s How to Become a U.S. Navy SEAL 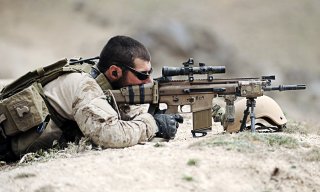 If you think you have what it takes to be a Navy SEAL, all you have to do is sign up and prove it.

Be aware, though, that out of roughly a thousand candidates who start the Navy SEAL training program each year, only about a quarter succeed. And know that all roads to becoming a Navy SEAL end at BUD/S—Basic Underwater Demolition/SEAL Training. There are several avenues to reach that point, but you must finish BUD/S before you can call yourself a SEAL.

One of the more popular options in attaining your lifelong goal is to join the Navy by enlisting. During Boot Camp, you will be required to take and pass the Special Warfare/Operations PST. If you pass the camp, then you are officially in the pre-training community, which means that you will eventually receive orders to attend BUD/S. In the Pre-Training Phase, you will learn about the Special Warfare Communities in addition to beginning your physical training program for the next month and a half to two months. Don’t forget about the PTRR—Physical Training Rehabilitation and Remediation—which you will have to endure for a few weeks.

If you do reach the Phases 1, 2, and 3 at BUD/S, this is when it gets really serious—and where many students quit or even get injured.

Here, you will regularly confront challenges like four-mile timed beach runs, two-mile ocean swims, BUD/S obstacle course, log PT, hundreds of reps of pushups, pullups, and ab exercises. Then there is drown-proofing, life-saving, and underwater knot-tying to keep your anxiety at sky-high levels.

And don’t forget about Hell Week. At this point in training, you will only get about four hours of sleep in total during a five-and-a-half-day period. The days are long, as much as twenty hours at a time, and you’ll have to push yourself to run, swim, and paddle more than two hundred miles. However, if you do make it past this week, you’ll more than likely have what it takes to become a Navy SEAL.

More specifically for Phase 2, you should have a basic understanding of SCUBA diving prior to attending. You’ll be required to use algebra to solve diving math problems as well as diving physics, with the most important laws being Boyle’s Law and Dalton’s Law of Partial Pressure. One particular test will gauge your ability to remain calm in the event of an emergency situation underwater.

For Phase 3, it is all about land warfare. Here, you will be immersed in shooting, learning, navigating land, and using demolitions, as well as patrolling, shooting, and moving. During this phase, you should be able to run ten to fifteen miles, swim three to four miles, and ruck twenty miles.

If you’re still on your feet, you have finished BUD/S but your SEAL training is not over. After BUD/S graduation, you go to SQT—SEAL Qualification Training. This advanced training program takes those who graduated and forms a TEAM that can operate in water, underwater, from planes and helicopters, ropes and parachutes, boats, and on foot.

After that, you will head to the SEAL Team that selected you to become the next “rookie.” Here, you will have to prove yourself all over again to the veterans while waiting for your first combat deployment.