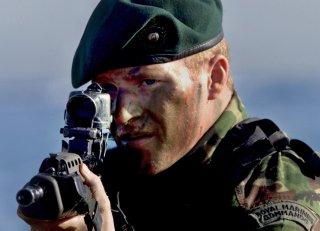 In September more than 1,000 sailors of the Royal Navy’s Littoral Strike Group and Royal Marines headed to the Mediterranean island of Cyprus to begin testing a range of new experimental military equipment. Over the three-month deployment ending sometime in December, the sailors and marines have been testing drones, autonomous systems, quad bikes, jet skis, and new communications platforms and devices.

This testing, which has also been conducted in the Black Sea and North Africa, has been to determine the capabilities of the Future Commando Force (FCF) and Littoral Strike Group (Experimentation) (LRG(X)) concepts. The FCF is designed to modernize the way Royal Marines operate, and it has been described by the Royal Navy as the most significant transformation and rebranding of the service since the Second World War. The goal of these efforts is to provide the UK with a more agile and lethal fighting force that could be ready for missions anywhere in the world at a moment’s notice.

It will change the mode of operation of the Royal Marines in the twenty-first century, Naval-Technology reported.

During the training in Cyprus, Royal Marine commando teams experimented with Malloy T-150 quadcopter drones, which were designed to carry and deliver supplies including ammunition, military jet ski vehicles, and communications gear weighing more than 60 kilograms each. Additionally, the drones, which can operate covertly, could provide aerial reconnaissance for the troops on the ground.

The troops also experimented with military jet ski-style vehicles that can be used to deploy small teams and supplies secretly ashore.

The Royal Navy Flagship HMS Albion had hosted the Capability Demonstration in Cyprus, which COMLSG Commodore Rob Pedre said had been the highlight of the LRG(X) deployment

“The demonstration by our sailors and marines was superb, and showcased the quality of our armed forces, while providing an insight into how the Royal Navy is integrating future technology and new concepts,” added Pedre. “The event was also an important expression of the UK’s steadfast commitment to our allies and partners, as we work together to support regional stability within the Eastern Mediterranean.”

Forces.net reported that the Royal Marines also recently established the “Vanguard Strike Company,” a new unit of more than 150 Marines and British Army Commandos, which is due to take shape by the end of this year. This new unit will have access to what has been described as “game-changing technology and weaponry” and is part of the larger Royal Marines modernization efforts. This includes returning commando forces to their roots.

After completing its exercises in Cyprus, the Royal Navy’s Littoral Strike Group deployed to Egypt. The Ministry of Defence announced that Defence Minister James Heappey will visit the ship and crew. This is part of London’s demonstration of its commitment to regional security while providing an opportunity for Royal Navy forces to conduct exercises with the Egyptian Armed Forces.