LG’s 77-inch OLED Simply Can't Be Beat. Period. (If You Can Afford It) 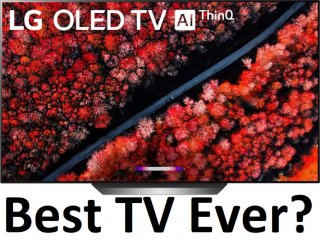 A bevy of picture-quality reviews throughout the past year have usually pinpointed one big winner in the OLED TV war – and that is LG.

The Korean company’s OLED technology is likely the best in the world, and it has proven on an annual basis why it should be considered the standard for all OLED TVs out in the market.

LG’s 77-inch OLED features one of the best image qualities ever tested on a TV. It delivers nearly perfect black levels, precise colors, wide viewing angles and outstanding uniformity. Even if your living room is sun-drenched on those hot, summer afternoons, this TV’s brightness level should take care of any annoying glares and reflections.

In addition to the inimitable OLED panel, LG boasts HDMI 2.1 features, including eARC, and comes with support for Amazon Alexa, Google Assistant and later Apple AirPlay 2. The remote control also lets you speak to, and hear from, those voice assistants. The WebOS menu system is fluid as well, so getting to your favorite streaming app or on-demand content will be a snap.

Because of the organic light-emitting diode technology, and thus the lack of backlight lighting, the overall design is sleek and slim – in fact, thinner than many smartphones. As with most TVs that feature super-slim designs, the speakers are usually a weak point. Although LG’s speakers are OK for everyday casual watching, one should really invest in a decent soundbar to bring out that cinematic experience when watching sports and action-heavy movies. The stand looks sturdy and quite nice as well, with its angled edges and medium width across the bottom of the screen.

Another great aspect of LG’s OLED is its superb variable refresh rate and low input lag, which will come in handy for hardcore gamers. Considering that the next-gen PlayStation and Xbox are in the offing, these are great features to have, and you’ll surely save money in the long run by not having to purchase a dedicated monitor for gaming.

You’ll also take comfort in knowing that this particular OLED TV is future-proof, as it can likely handle all of the new tech advancements and add-on devices in the future. Sure, you might need a dongle or an adapter here and there, but you won’t have to go out and spend thousands on another OLED TV.