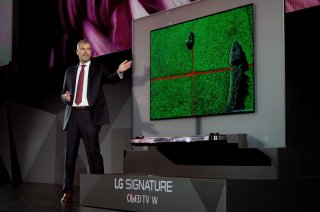 Like most TV manufacturers, LG introduced its latest lineup at CES in January, with most of the models reaching the market in March.

Now, one ranking lists one of LG’s new models as the best TV currently available on the market. RTINGS publishes an ongoing ranking of the best TVs available and has begun to add 2022 models. As of now, LG’s G2 OLED TV holds the #1 ranking, with another 2022 LG OLED model, the LG C2, ranking second.

Two LG OLED models from 2021, the G1 and C1, are currently ranked fourth and fifth, with the 2020 LG CX OLED also available in the top ten. The site’s review of the G2, published April 22, gave it a “mixed usage” score of 9, including subscores of 9.4 for movies and 9.3 for video games. The C2 also received an average score of 9, but fell slightly behind the G2.

“The LG G2 OLED is a superb TV for most uses. Thanks to its nearly infinite contrast ratio, it displays deep blacks with perfect uniformity in a dark room, making it an exceptional choice for watching movies in a dark room,” RTINGS said in its review.  “It's also one of the brightest OLED panels ever, making it a great choice for watching TV shows in a bright room. It also has an incredibly wide viewing angle, so it's a good choice for a wide seating arrangement. It's also an excellent choice for use as a PC monitor. Finally, it has an impressive selection of gaming features, and it delivers a superb gaming experience overall.”

The review’s listed positives include “near-infinite contrast ratio” and “fantastic reflection handling,” while it also stated that it is “significantly brighter than previous OLED TVs.” Negatives include that “aggressive ABL can get distracting with large areas of brightness” and “some uniformity issues, especially at an angle.”

TechRadar has also given the G2 OLED TV a positive review, giving it five stars. “The G2 OLED’s big story is that it takes the latest (WRGB-type) ‘Evo’ OLED panel and adds in a new heat sink element not present in 2021’s G1 series. This might sound like a mere technicality on paper, but it actually allows LG to bring enough extra brightness to the table to take OLED picture quality to places we once never imagined it would be able to go,” that review said.