Libyan Civil War: Is That It for Haftar? 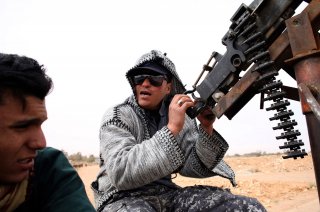 The eastern-based Libyan National Army (LNA) has suffered several significant setbacks in the past weeks as a result of recent offensives by the UN-backed and internationally-recognised Government of National Accord (GNA), with GNA-linked forces capturing several cities from the LNA west of Tripoli, near the border with Tunisia, as well as a key airbase southwest of the capital.

While the UN-backed government led by Fayez al-Sarraj had been under overwhelming pressure since April 2019, when General Khalifa Haftar’s LNA launched an offensive to take Tripoli and was closing in on the capital, the tables have turned with the “Volcano of Rage” operation carried out by the GNA with Turkish military assistance—without which the government victories would not have been possible. The operation intensified with airstrikes, mainly by Turkish drones, and the GNA announced in mid April that it had retaken eight cities, such as Sorman as Sabratah, which meant it had control over the whole coastal area west of Tripoli. After several weeks pressing hard for the al-Watiya airbase, the only airbase near Tripoli controlled by Haftar’s forces—and which had been in their hands since 2014—on May 18 the “Volcano of Rage” operation captured the base, and on the next day,  the LNA pulled out of parts of Tripoli. The government-led counteroffensive then continued with the operation retaking the towns of Bader, al-Jawsh and Tiji, also near the Tunisian border.

This represents a major shift in the course of the Libyan war as the GNA can hope to put a definitive end to the year-long siege of Tripoli, and as the threat of a full collapse of the GNA is now far more remote. The capture of the al-Watiya airbase stands out due to its strategic importance, and the GNA will surely use the momentum it gained from previous victories and move on to attempt to recapture the city of Tarhuna and the town of Qasr Bin Gashir. The former is a major supply point from the al-Jufra airbase for Haftar’s forces. The GNA intends to continue pressing for al-Asaba—after capturing it from the LNA and then losing it again—as recapturing this town is seen as essential to recapture Tarhuna, south of Tripoli. The latter controls the southern entrance to Tripoli, and recapturing it would give the GNA the feeling of assertion that the capital is now much more protected.

It appears that Haftar’s chances of getting through this series of losses are slim. His attempt to take Tripoli has failed and his international backers seem to have grown tired of the fact that he is inflexible and difficult to work with, always making his own decisions—as was the case when he ignored Russian and Turkish efforts for a ceasefire in January and left Moscow without signing an agreement, for example. The UAE—his main military backer—and Egypt’s faith in him appear to falter as  a Libyan political source close to Haftar and an Egyptian official pointed out, and as a recent visit to Cairo by the head of the Eastern-based parliament, Aguila Saleh (viewed as a potential counterweight to Haftar) may suggest. Haftar’s backers bet on the Marshal thinking he would be able to quickly deal with the GNA, but a year of failed attempts to take the capital and the GNA’s ultimate counteroffensive rolling back his gains may well cost him some goodwill on the UAE and Egypt’s part. The next move for both countries may be the same as that of Russia, which is to support Aguila Saleh, the head of the Tobruk-based House of Representatives, with whom Haftar had a recent fallout, as Saleh offered a diplomatic way out of the crisis just as Haftar was brushing aside a key agreement paving the way for a negotiated solution. While this may not have been the preferred outcome of Haftar’s backers, given the current situation, negotiations may be the only realistic strategy at this time.

As for Moscow itself, the fact that it is working with Saleh does not necessarily mean that it will abandon Haftar. After the defeat in the al-Watiya airbase, Russia evacuated the Wagner Private Military Contractors from the Tripoli frontlines but there is no guarantee that they in fact left the country, with forces backing the GNA saying that they were being moved to an “as-yet unconfirmed destination”, and the mayor of Bani Walid, where the fighters went after pulling out of the Tripoli frontlines, later informing that they headed south. While they may not be on the frontline - contrary to last year, when they served to counter-balance Haftar’s losses—they could easily be redeployed. Russia also sent warplanes to the al-Jufra airbase last month underscoring its interest in keeping some leverage—and a broader appetite for sustained military presence along the northern African coast. Moscow seems to be hedging its bets and waiting to see how the situation will play out now.

Even though the UAE would have much to lose with Haftar’s defeat, it is indeed possible the country will not continue to side with the general, and along with Egypt, joining Russia in looking for a replacement for Haftar seems to be the next move. Moscow will likely keep exploring its different options and analyse which are worth investing more in.

What seems certain is that with Haftar in command there will not be a political agreement. He has opposed it before and will likely not change his mind about it. If Haftar is able to continue to secure at least some international military backing, he will not give up as he has shown before that he does not mean to quit. On the other hand, if he indeed loses all the international military support he enjoys, it is safe to say his days are numbered.