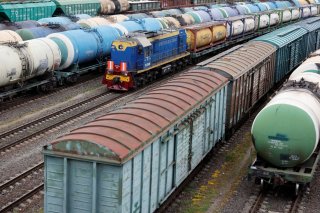 The Lithuanian government announced earlier in the week that Russia would no longer be allowed to transport items sanctioned by the European Union (EU) from its main territory to Kaliningrad, its exclave on the Baltic Sea coast, through Lithuanian territory.

The ban was first announced on Friday by Anton Alikhanov, the Russian governor of the Kaliningrad Oblast, via a video message, according to Reuters. It went into effect on Saturday, following a “clarification” from the European Commission to Lithuania’s state-run railway service.

At the onset of Russia’s invasion of Ukraine, the European Union placed sanctions on dozens of Russian goods, including raw construction materials, metals, coal, and advanced technology. Alikhanov indicated in his video message that Lithuania’s ban could disrupt half of Kaliningrad’s imports from mainland Russia. However, he emphasized that the transfer of materials on the EU sanctions list could continue to occur from mainland Russia to Kaliningrad could continue to occur via cargo ships from Saint Petersburg, Russia’s second-largest city and a major seaport in northern Europe, to Kaliningrad via the Baltic Sea.

“Our ferries will handle all the cargo,” Alikhanov said, urging citizens of Kaliningrad not to resort to panic buying, which he emphasized could worsen the city’s supply situation.

The city of Kaliningrad—formerly known as Konigsberg and located within the historic territory of East Prussia—fell into Russian hands after World War II. Following the defeat of Nazi Germany, East Prussia was divided into northern and southern halves; the northern half was ceded to the Russian SFSR within the Soviet Union, while Poland received the southern half. At the time, the three Baltic states were constituent members of the Soviet Union, making the separated nature of the territory unimportant. However, following the dissolution of the Soviet Union and the independence of the Baltic states from 1989 until 1991, Kaliningrad became separated from mainland Russia, although it continues to be connected by a rail line and a set of natural gas pipelines.

The exclave is also home to Russia’s Baltic Fleet and is a major hub for Russian military equipment. After the leaders of Sweden and Finland indicated that the two Scandinavian countries would join NATO, Russian Security Council chairman and former president Dmitry Medvedev warned that Russia could station “Iskander” nuclear-capable ballistic missiles in the territory, although Lithuania observed that the missiles were likely present in the territory anyway.