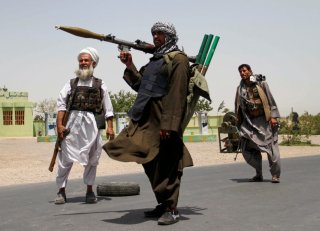 For years, Afghan security forces have struggled to adapt to the U.S. military model, but pro-government militia fighters in Herat province have proven able to protect their city. Resolve to fight and a competent command structure is a likely explanation for their success.

A militia led by Mohammad Ismail Khan, a former mujahideen leader from the anti-Soviet war and a senior member of the Jamiat-e-Islami party, almost single-handedly prevented Herat city from falling to the Taliban. Parts of Herat ultimately fell but any chance of retaking it will likely hinge on the militias rather than the Afghan Security Forces (ANDSF). This phenomenon lends credence to the idea that a localized military unit model, which draws on the local population, is likely to be more effective to keep the Taliban at bay, especially in areas neglected by the ANDSF. Thus, limited foreign support for regional militias in Afghanistan may be a way to slow down Taliban advances while the regular Afghan military re-organizes itself amid the U.S. military withdrawal. Large swaths of Afghanistan are already under Taliban control but their manpower is stretched thin. The time to reverse this trend is now and it is quickly fleeting.

Arming local defense forces, including local militias, to fight the insurgency and provide security at the local level is a controversial idea within the Afghan government. It doesn’t want to lose control of warlords. But the risk of failing to act may be to lose the entire country.

In the last two weeks, as the Taliban rapidly captured sixteen out of eighteen districts and seized two key border crossings to Iran and Turkmenistan, Ismail Khan deployed his militiamen to key parts of the city. In mere hours, hundreds of armed men responded to Ismail Khan’s call. “The Emir Saheb’s house (Emir is a title given to Ismail Khan by Herati residents and loyalists) was packed with 2,000 armed men ready for the battlefield on the day he called on people to protect lives, properties, and freedom of people,” said Farhad Mohammadi, a thirty-year-old militia member from Herat with a degree in Law and Political Science.

“We are ready to protect and defend the lives, dignity, and honor of our people, something we [will] passionately sacrifice our lives for. It is a time to take action and take our steps wisely,” said Sufi Gul Ahmad, a mujahideen commander who fought against the Taliban back in the early nineties.

A public uprising against the Taliban and in support of local militias followed Ismail Khan’s mobilization. On the sixth night of the fight, August 2, observing the Taliban’s retreat, residents of Herat city marched on the streets chanting “Allah u Akbar” or God is great. The locals also demonstrated their support to the armed militia by willingly providing them with food, water, shoes, and medicine on the battlefield. “A woman donated her gold earrings, which was all she had, to provide food and medicine to the local fighters. Another group of female residents visited the fighters in the front line and brought them 200 pairs of shoes,” said Mohammadi. Soon thousands of social media users created a hashtag, “Qiyam-e-Herat” or Herat Uprising, and demonstrated support to militia members led by Ismail Khan and the ANDSF.

This is a clear example of the level of public approval some local militia enjoy. Recognizing their will to fight and protect their city, some government officials, including Amruallah Saleh, the Vice President of Afghanistan, endorsed the local militia movement to resist the Taliban invasion. In other parts of Afghanistan, like Sheberghan, the capital of Jawzjan province and warlord Marshal Abdul Rashid Dustom’s home city, ordinary people followed suit and have taken up arms under the leadership of other former mujahideen leaders against the Taliban.

As the U.S. troop withdrawal nears its completion, the U.S,-trained Afghan military—a force that uses systems and equipment provided by Washington—is failing to contain the Taliban’s advances, particularly in the countryside. Over the past few weeks, the Taliban has managed to take control of 400 districts, seized border crossings, and set up its own checkpoints on key highways. “Amir Saheb saw Herat falling in front of him and invited us to support the National Security forces and protect our home alongside the army. With independent militia engagement in the conflict, now a balance is about to be created,” Mohammadi said.

Sufi Gul Ahmad added, “If the National Army by themselves are not able to protect our home from the Taliban, we should have engaged. We have the necessary skills and we know what techniques are effective in combat with the Taliban.”

According to interviewed militia members, the local fighters have the necessary resolve, aspiration, and know-how to keep the Taliban at bay. All they need is military equipment and resources to feed their men and treat their injured. “The morale is high for now. The victory is inevitable if the morale is kept high,” said Mohammadi. However, as Mohammadi explains, the local militia’s equipment is currently no match for the weapons and equipment that the Taliban use against them. “Our men have some old weapons that we kept from our war against the Soviet Union, but the Taliban have night vision goggles (NVGs) and many other powerful devices and developed weaponry,” Mohammadi explained.

The idea of supporting militias is usually met with criticism by some experts in Afghanistan. For example, Vanda Felbab-Brown, a Brooking scholar, believes that these local uprisings may turn into predation on local or neighboring communities afterward, which can create an opportunity for the Taliban to reinsert themselves back into local conflict. Whatever issues come with supporting armed militia groups and whether or not that might lead to empowering strongmen across the country, it is becoming quite clear that they offer the only means to hold back the Taliban as the U.S. military walks out the door. Cooperation between militia groups and the ANDSF is the only realistic strategy to protect Afghanistan from its most existential threat—Taliban domination.

Local militia and former mujahideen leaders are the reality of Afghanistan, and thus, a more localized military unit is more sustainable by definition. Moreover, a hybrid military model, using a centralized army along with the support of local militia is a rule that was followed by many former occupying powers in the country. In contrast, unsuccessful leaders of the past, like King Amanullah Khan, tried to create highly centralized military systems but failed to protect the country. The country is beginning to see the merits of this strategy. At a meeting with political leaders on Monday, August 9, President Ashraf Ghani supported public uprising forces. He notably agreed on the formation of a joint command center to manage and equip regional militia members in the battle with the Taliban.

Providing some conditional support—which would include aiding the local militia with supplies and backup forces—as well as supporting the Afghan army with standardized and upgraded equipment an effective option in preventing the Taliban’s advancement and even recapturing fallen areas. The world needs to focus on those who are capable of providing protection to local communities and invested in their success.

Nazila Jamshidi is a gender equality and human rights specialist involved in Afghanistan’s development and democracy processes for the past decade. She has worked for the UN, USAID, the IFRC, and various other international organizations. A native of Afghanistan, Jamshidi is now an M.A. candidate at Columbia University.