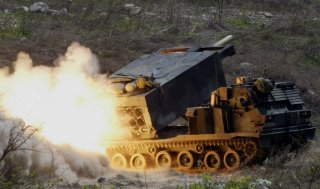 The Precision Strike Missile is the United States’ newest post-Intermediate Range Nuclear Forces Treaty missile. It is the Army’s first foray into a new class of previously prohibited weapons.

Since the United States withdrew from the Intermediate-Range Nuclear Forces Treaty in 2019, the United States is no longer bound to the INF treaty stipulations. The INF banned land-based ballistic and cruise missiles and missile launchers with ranges of 500 to 1,000 kilometers and 1,000 to 5,500 kilometers.

Although Lockheed Martin did not specify precisely how long the Precision Strike Missile flew in its press release, it is possible and even likely that the missile’s range falls somewhere within the old prohibited ranges. Lockheed Martin’s PrSM page says the missile’s flight profile is in the 60 to 499-kilometer range.

Lockheed Martin describes the missile as a “new surface-to-surface weapon system (that) will deliver enhanced capabilities to attack, neutralize, suppress and destroy targets using missile-delivered indirect fires out to 499+ kilometers,” and “provides the Joint Force Commander with increased range, lethality, survivability and missile load out. These enhanced capabilities are critical to the successful execution of Fires in support of Multi-Domain Operations.”

The test could mean the United States’ newest post-INF Treaty missile is a class of newer, longer-range missiles that they previously would not have been able to put into service.