Long-Awaited B-21 Bomber Set to Roll Out in December 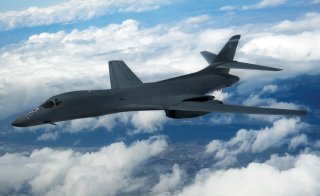 The B-21 Raider, the U.S. military’s next-generation heavy bomber, isn’t expected to enter service until 2026 or 2027. Earlier this year, it was reported that the first flight of the B-21 would be delayed to 2023.

“Recently, the Air Force released a new estimate for first flight; projected for next year, 2023,” an Air Force spokeswoman told the publication then known as Air Force Magazine. “This estimate reflects the current status of the program,” she added.

Now, Air & Space Forces Magazine is reporting that the B-21 Raider will “roll out” of Northrop Grumman’s Palmdale, Calif., plant later this year, in early December. That means the public will glimpse it for the first time.

“You probably won’t see it from all aspects,” he said. That’s because the Air Force doesn’t want China or any other potentially hostile nations to collect any more information than necessary.

Northrop Grumman had more to say in a press release about the rollout.

“The B-21 is the most advanced military aircraft ever built and is a product of pioneering innovation and technological excellence,” Doug Young, sector vice president, and general manager, Northrop Grumman Aeronautics Systems, said in that release. “The Raider showcases the dedication and skills of the thousands of people working every day to deliver this aircraft.”

Northrop was awarded the contract in 2015. Currently, six B-21 test aircraft are in “various stages of final assembly” in Palmdale. The company confirmed 2023 as when the first flight will take place but added that the exact timing will depend on “ground test outcomes.”

“Northrop Grumman is proud of our partnership with the U.S. Air Force as we deliver the B-21 Raider, a sixth-generation aircraft optimized for operations in highly contested environments,” said Tom Jones, corporate vice president and president, Northrop Grumman Aeronautics Systems.

The rollout in December will be an invitation-only event, the company said.

The plane is called the “B-21” because it is the first new bomber of the 21st century, while “Raider” is in honor of the Doolittle Raiders, who struck Japan during World War II.

The Air Force had announced in 2021 that it had “something special” planned for the B-21 rollout.

“There will be a ceremony at some point—whether it’s for the very first one for the first flight, or a little later …. I’m sure we’ll do something special as we bring out the B-21,” Air Force Secretary Frank Kendall said last year.