Look Out America: Russia's Is Claiming To Have Smarter "Smart Bombs" 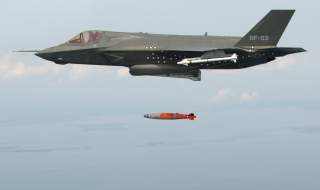 Key point: Syria has been a critical testing ground for Russian military tech.

Russia claims to have developed an ingenious new smart bomb.

Or rather, instead of making the bomb smarter, it's the aircraft carrying the bomb that has all the brains, according to the Russian news site the Saker.

The Saker article attributes the "amazingly accurate" and "quasi-miraculous" Russian bombing in Syria to a weapon called the SVP-24. The SVP-24 is a system that turns unguided conventional bombs into precision-guided weapons, similar to the U.S. Joint Direct Attack Munition (JDAM). But whereas the JDAM is a guidance kit attached to an iron bomb, Russia's SVP-24 attaches the guidance kit to the bomber itself.

"What this system does is that it constantly compares the position of the aircraft and the target (using the GLONASS satellite navigation system)," the Saker says.

"It measures the environmental parameters (pressure, humidity, windspeed, speed, angle of attack, etc.). It can also receive additional information from datalinks from AWACS aircraft, ground stations, and other aircraft. The SVP-24 then computes an 'envelope' (speed, altitude, course) inside which the dumb bombs are automatically released exactly at the precise moment when their unguided flight will bring them right over the target (with a 3-5 meter accuracy)."

Thus, "the pilot does not even have to worry about targeting anything," according to the Saker. "He just enters the target’s exact coordinates into his system, flies within a defined envelope and the bombs are automatically released for him. He can place his full attention on detecting any hostiles (aircraft, missiles, AA guns)."

And why is this better than the JDAM? It's cheaper, the Saker argues. Each JDAM kit costs around $25,000 per bomb, and when the bomb is dropped, the kit it expended. Because the SVP-24 is fitted to the aircraft rather than the bomb, it can be reused each time.

Don't these tropes sound familiar? Brilliant new weapon unveiled (a constant refrain since the Smart Bomb Revolution in the Vietnam War). It is, it seems, the story of simple Russian engineering versus over-complicated American technology.

Yet before we pronounce a smart bomb breakthrough, let's take a closer look.

The SVP-24 sounds like nothing more than an automatic bombing system where the aircraft does all the computing and the bomb just lands where it is supposed to. This has been indeed the goal of military aviation since the first bombsights were developed before World War I.

Unfortunately, bomb-aiming systems have consistently missed the mark. Despite claims that the World War II U.S. Norden bombsight could drop a bomb into a pickle barrel from 20,000 feet, the Circular Error Probable—the distance from the target that 50 percent of the bombs would fall on—of a B-17 was 3,300 feet. Hence, all those photos from World War II or Vietnam of bombs landing around—but not on—the target.

The beauty of smart bombs is that they can be guided precisely onto a target, meaning one bomb can accomplish what an entire saturation raid cannot. If an aircraft-based system like the SVP-24 really can compute every factor, from aircraft motion to wind gusts, then the bomb should land on the target. But if one bit of data is wrong, and the bomb is descending on an incorrect trajectory, then there is no way to guide it in mid-air.

Perhaps that's why Russia has been accused of hitting targets such as medical centers in Syria. Maybe real smart bombs are a smart idea, after all.