Looks Can Be Deceiving: This "Smart Gun" Is a Really Bad Idea 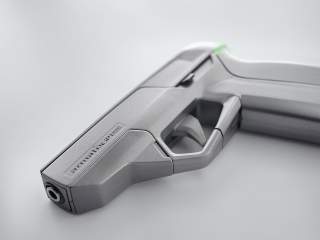 America loves guns. There are an estimated 300,000,000 firearms in the United States, roughly one for each citizen. Sales are brisk. In 2013 gun vendors did 21,093,273 background checks for firearms sales.

Most Americans use guns for personal defense and recreation. Still, guns are designed to kill—so safety and security are big problems. And a new “smart” handgun isn’t going to solve those problems.

In 2010, 600 Americans died from accidental firearm discharges. The Department of Justice estimates that between 2005 and 2010, 230,000 guns were stolen annually. Stolen weapons disappear into the criminal underworld and might be used in violent crimes.

This may sound like a step in the right direction, but it isn’t. Guns must be simple in operation and work reliably in order to be effective and earn the trust of owners. There are too many things that can go wrong with the smart gun for anyone to stake their life on one.

Smart guns are actually less safe than regular ones—and could end up getting firearm owners killed.

Built by the German manufacturer Armatrix, iP1 resembles a high-tech Walther PPK, James Bond’s weapon of choice. Sleek and futuristic-looking, iP1 comes in .22-long-rifle caliber with a 10-round magazine.

It’s a curious choice of caliber, since the .22 round is less than ideal for self-defense. It’s possible the electronics inside the gun cannot stand up to the recoil of a heavier bullet.

IP1 combines a handgun with a wristwatch—the two connect by way of radio-tag technology. To activate the gun, the shooter must both wear the wristwatch and punch a code into it. The wireless security system has a range of only 10 inches, so the shooter must grasp the gun with both hands or hold it with his watch hand.

The gun is packed with safety features. In addition to the electronic safety, the gun also has a grip safety—meaning it can’t fire unless the shooter is firmly holding it. It also has a drop safety, so if you drop the gun while it’s loaded, it won’t accidentally go off.

IP1 costs $1,399. The watch is sold separately for another $399. Considering a Glock handgun costs $579 at your local gun store, this high cost is hard to justify.

When you need a gun, you also need it to perform reliably. Whereas most guns only require the basic operating mechanism to work properly, with a smart weapon you also have to worry about the electronics, batteries, software, grip safety and drop safety and losing the watch.

In other words, there are lots of ways the system can break down. And when a gun breaks down, people can get killed.

There’s another issue unique to the smart gun. It’s practically begging for hackers to attack it. Armatrix claims its system is encrypted. That doesn’t mean that someone can’t hack your firearm—it just means it won’t be easy.

And how would you know if your gun had been hacked? You wouldn’t—until you drew the weapon for self-defense and it failed to work.

Let’s consider a hypothetical scenario. You live in a rough neighborhood and you recently bought a smart pistol for home defense. You’re lying in bed reading a good book when suddenly there’s a terrible crash downstairs.

Startled, afraid, adrenaline pumping, you drop your book and spring into action. Your hand instinctively goes to the nightstand drawer to retrieve your smart pistol.

But where is your smart watch? To your horror, you realize that you took a shower just before bed and removed the watch out of habit. You left it on the bathroom sink!

You slink quietly out of bed and creep into the bathroom, just as you hear boots crunching on broken glass downstairs. Your hands fumble across the sink counter, feeling for the watch. You find it and put the gun down to secure the watch on your wrist.

You wince as you turn on the bedroom light. The light will give you away, but you need it to enter your code—or your weapon won’t work.

You put down the gun to type and discover that in the darkness you accidentally put the watch on upside down. You take it off and put it back on again. Fingers trembling, it takes you a few tries, but you finally type the code correctly.

The guy downstairs is rifling through your desk, making quite a racket. It’s only a matter of time until he comes upstairs.

A light on the gun’s backstrap glows red. You’re pretty sure that means the gun is locked, and the light turns green when unlocked. Or is it the other way around? Your mind is racing and it’s difficult to remember. Green could mean “go,” but red could mean “danger, the gun is armed.”

Up ’til now you’ve done everything right, but the gun is still glowing red. It dawns on you that your carpal tunnel has been acting up so you started wearing the smart watch on your left wrist. You’re holding the weapon with your right—and now your hands are far enough apart that the RFID chip doesn’t register.

The burglar is coming up your staircase! You must decide!

You grip the gun with your left hand. The light on the backstrap of the handgun suddenly turns green.

That was easy, wasn’t it?

The basics of firearm design really haven’t changed all that much in the past hundred years. Simplicity ensures reliability and ease of use. Not only are there too many conditions to meet before actually use the smart gun, there are too many ways the system might fail.

The ideal solution for gun safety is still the old-fashioned one. $1,788 can buy a Glock 19 handgun, a gun safe that weighs 234 pounds and 800 rounds of nine-millimeter ammunition. You’d have a reliable handgun untethered to an obnoxious security system, a safe that would take three men to lift and keeps children at bay and bullets to shoot.

Oh, and you can wear whatever watch you want on either wrist.

The smart gun is a great idea ... in theory. Wearing a wristwatch and punching in a code might be acceptable to recreational shooters who shoot purely for pleasure. But for people who buy handguns for self-defense and expect to use them in real-world conditions, smart guns are a terrible idea that might get them killed.