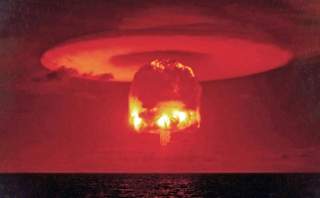 A recent video by Princeton University’s Program on Science and Global Security, Plan A, suggests that the use of one low-yield non-strategic nuclear weapon, in a NATO-Russia conflict, would lead to the large scale use of strategic nuclear weapons and the death of more than 90 million people. While the video’s makers deserve credit for its production quality and very ominous background music, the scenario they offer, while always possible, is highly unlikely.

The creators were seeking to trot out a tired argument of the disarmament community which claims that any use of nuclear weapons will lead to the end of the world. Thus, the United States it is argued should pursue the reduction and elimination of nuclear weapons, even when of the nine nations with nuclear weapons in their military forces all refuse to follow suit.

Actually pursuing such an agenda will leave the United States at a distinct disadvantage against Russia and China, whose authoritarian regimes do not spend their days fretting over a remote and highly unlikely scenario. Instead, they are focused on concrete ways to use nuclear threats and coercion to advance their own interests—to the detriment of the United States.

The reality of nuclear scenarios is that the military takes them very seriously and regularly uses large “Title 10” wargames to better understand the possible courses of action an adversary may take—including the use of nuclear weapons against the United States. “Red” players (an adversary) often come from organizations with a deep background and understanding of an adversary and their approach to warfare.

They can also be former officials from a given country. The objective is to solicit the highest level of realistic action in the wargame, which provided the greatest insight for the wargame’s sponsors. Personal experience with these wargames suggests that neither the United State nor Russia would act as suggested by the Princeton team. The use of nuclear weapons and escalation to large scale conflict is something never taken lightly.

Experience does suggest that the challenge of effectively communicating in the midst of a conflict can often lead adversaries to act in a more cautious manner—not radical escalation to full-scale nuclear war. Russian nuclear doctrine includes an “escalate-to-deescalate” within its “escalate to win” approach. This is specifically designed to use a low-yield nuclear weapon in a conventional conflict with NATO and force the United States, specifically, to move down the escalation ladder, all the way to capitulation, rather than toward a scenario of continuing irrational escalation as assumed by the Princeton team.

The Russian theory of victory depends on the United States having no real answer to such a Russian move. Power abhors a vacuum. An inadequate nuclear arsenal—one with low-yield weapons—creates such a vacuum. The Russians, a revisionist power, will seek to fill it.

Despite their adversarial nature, there is evidence that Russia seeks to avoid the use of nuclear weapons and has a clear understanding of what is at stake when they are part of the equation. When the United States fields low-yield nuclear weapons, it takes away that option from the Russian theory of victory. That is a good thing.

Suggestions that Donald Trump or Vladimir Putin are waiting with baited-breath to destroy humanity or that they lack the wherewithal to act in American or Russian interests is the epitome of elitist arrogance. Both men have reached the pinnacle of a competitive political system through shrewd calculation. Neither is a fool. Yes, Putin is a tyrant and seeks nuclear weapons as a tool of coercion and blackmail, as we have previously noted, but neither he nor President Trump are seeking to bring about the apocalypse.

Both Presidents Trump and Putin are supported by their respective militaries in their belief that low-yield nuclear weapons are a vital part of maintaining stable deterrence in Europe. Neither military is particularly interested in waging a war of annihilation. Military leaders, culturally and attitudinally, tend to be risk-averse and conservative. This leaves them far less willing to engage in large-scale nuclear exchanges as Plan A suggests. Personal experience suggests that senior leaders will go to great lengths to avoid risk. There can be no riskier prospect than the destruction of humanity.

In a July article, David Axe suggested that there is no such thing as a “small nuclear war,” but the reality is that we really do not know what the next use of nuclear weapons might entail. To suggest a small nuclear war is not possible is no more than a guess. If Nobel laureate Daniel Kahneman is correct in his explanation of human behavior, the leaders of both the United States and Russia, regardless of who is in the White House or the Kremlin, should engage in behaviors that seek to avoid or minimize losses. Dramatic escalation to all-out nuclear conflict runs counter to observations of human behavior.

Sadly, and dangerously, the Princeton study seeks to engage the US in changing its nuclear deterrent policy to one where, even if attacked with nuclear weapons, we should not respond with a nuclear retaliatory strike but respond only with conventional force. This is bad policy.

One of the Princeton study participants told the House Armed Services Committee on March 6, 2019 that he wanted Russia to have the onus of breaking the nuclear taboo and strike first with nuclear weapons. A letter was also circulated earlier in the year—signed by a group of nuclear arms control enthusiasts including a member of the Princeton study—which warned that any US response with nuclear weapons would surely lead to Armageddon and thus such an American nuclear retaliatory response should be avoided. One such advocate, Michael Krepon of the Stimson Center, wrote on October 6 that his new idea is not “no first use,” but “no use,” ever.

When one of us asked the former commander of US Strategic Command, Admiral Cecil Haney, at the Minot Task Force-21 and Geostrategic Analysis Triad symposium (October 8, 2019) what the consequence of such a policy would be, Haney responded that we would be inviting our adversaries to initiate the use of nuclear weapons. This is exactly what US deterrence policy has sought to avoid for 70 years.

In the end, the American people can neither afford to let outlandish scenarios drive the nation’s nuclear policy, nor can they allow the Russian, in particular, to think that they have the ability to use a nuclear weapon without a proportional response. The stakes are far too high. Low-yield nuclear weapons are that response and a clear signal of American resolve and flexibility at every level.

Contrary to the views of the Princeton team and others like them, hope is not a strategy and can never serve as the foundation of American deterrence. As Donald Rumsfeld once said, “Weakness is provocative.”

Peter Huessy is Director of Strategic Deterrent Studies at the Mitchell Institute for Aerospace Studies and President of his own defense consulting firm, GeoStrategic Analysis.

The view expressed are those of the authors alone.